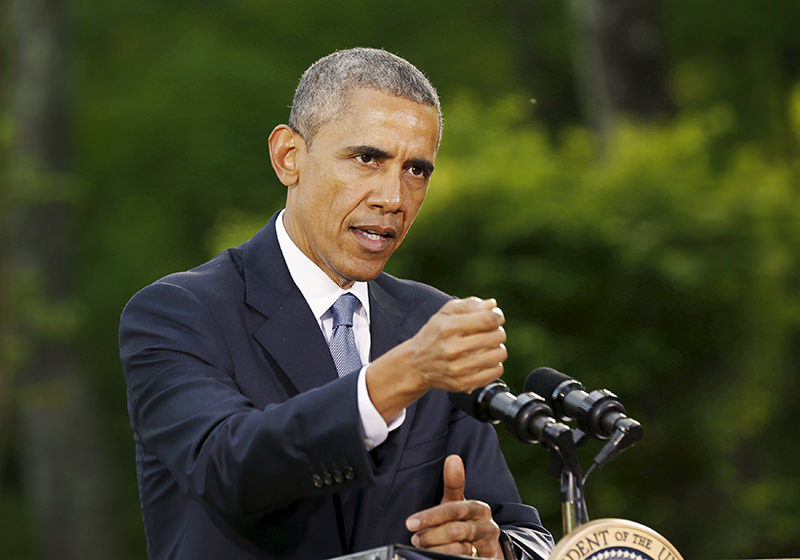 | Reuters Photo
by Anadolu Agency Jul 01, 2015 12:00 am
President Barack Obama said Monday he would walk away from negotiations if Iran fails to abide by prior commitments about its nuclear program.

"There has been a lot of talk on the other side from the Iranian negotiators about whether, in fact, they can abide by some of the terms that came up in Lausanne," he said, referring to the Swiss city where a framework agreement was worked out between Iran and world powers in April. "If they cannot, that's going to be a problem because I've said from the start, I will walk away from the negotiations."

He said the implementation of the framework agreement would be sufficient to achieve his goals regarding Iran's nuclear program.

But Iranian negotiators object to some provisions of the inspection mechanism and the country's parliament recently approved a draft bill that prevents inspection of military sites as part of a final agreement.

Obama's spoke at a press conference with Brazilian President Dilma Rousseff who is on a three-day visit to the U.S.

He also pointed out that the deal would not be based on trust.

"That can't simply be a declaration by Iran and a few inspectors wandering around every once in a while. That's going to have to be a serious, rigorous verification mechanism. And that, I think, is going to be the test as to whether we get a deal or not," he added.

The U.S. and world powers had set a June 30 deadline to reach an agreement but on Tuesday the State Department announced a one-week extension to July 7, just hours before the deadline was set to expire.

Turning to Greece, the American leader warned that the ongoing debt crisis there could have global consequences.

"If Europe's not growing the way it needs to grow, that has an impact on us," he said. "Those are major export markets and that can have a dampening effect on the entire world economy."

His team has been monitoring the situation, Obama said, as he again called on European leaders to help Greece find a way out of the crisis.

Eurozone finance ministers held a meeting to discuss a last-minute bailout proposal by Greece but made no decision. Greece must make a 1.6 billion euro ($1.8 billion) payment to the IMF to by end of Tuesday avoid a default.

Obama and Rousseff seemed to have managed to put behind them the uproar of last October after former NSA contractor Edward Snowden leaked documents that revealed the U.S. spied on Rousseff's personal communications and those of other Brazilians. That prompted the Brazillian president to cancel a state visit to Washington.

Asked what has sicne changed that she would decide to visit to the U.S., Rousseff said that Obama and the U.S. government has promised to no longer engage in spying on friendly nations.

"Furthermore, he has told me that, you know, should he ever need non-public information about Brazil, he would just pick up the phone and call me," she added.

The two leaders announced an economic partnership in several areas including infrastructure, education and technology as well as sharing commitments on the climate change.
Last Update: Jul 01, 2015 9:53 am
RELATED TOPICS