‘Congress will block some Obama moves on Cuba' 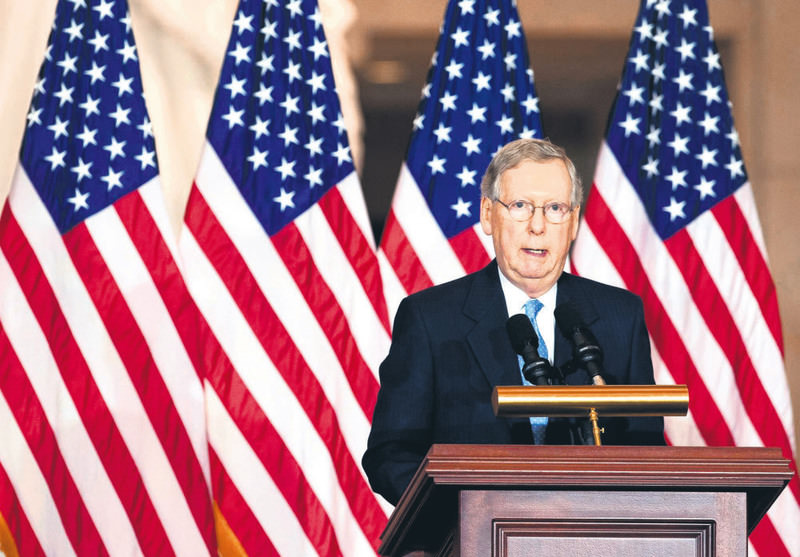 by Daily Sabah with Reuters Jul 13, 2015 12:00 am
The top U.S. Senate Republican said on Sunday that Congress is likely to block any nominee that President Barack Obama names as ambassador to Cuba and retain broad economic sanctions, even as Obama moves to establish diplomatic and economic ties with the Communist-run island. Senate Majority Leader Mitch McConnell, interviewed on Fox News, said the Senate is unlikely to confirm any U.S. ambassador to Havana nominated by Obama. McConnell added, "There are sanctions that were imposed by Congress. I think the administration will have a hard time getting those removed. This is a policy that there is substantial opposition to in Congress."

Last December, Obama announced he would use his executive powers to move toward more normal relations with Cuba after a five-decade standoff. Those steps have included establishing diplomatic relations, an expansion of some travel from the U.S. to Cuba, increasing the limit on remittances to Cuban nationals from those living in the U.S. and expanding some trade in goods and services. But it would be up to Congress to allow normal travel and full trade. Republicans control both the Senate and House of Representatives. Many Republicans oppose Obama's moves toward better relations with Cuba, claiming they only bolster Cuba's communist leaders. Republicans also fear alienating Cuban Americans in Florida who have fled the island nation and are supporters of the Republican Party. Obama charted a new U.S. path toward Cuba with the support of some Republicans, including freshman Senator Jeff Flake of Arizona.

Obama said in March his moves were already paying dividends, saying that since December, the Cuban government had begun discussing ways to reorganize its economy. McConnell has been a consistent critic of Obama on a range of foreign policy fronts, including Cuba and U.S. participation in multilateral nuclear talks with Iran. "This president has been involved in ... talking to a lot of countries: talk, talk, talk. And Cuba is a good example. He thinks that simply by engaging with them we get a positive result," McConnell said, adding, "I don't see any indication that Cubans are going to change their behavior." Human rights advocates have admonished Cuba for abuses, including arbitrary imprisonment of political opponents, and Cuba's tight control of its economy also has been a lightning rod for criticism.

After the 1959 revolution that brought former president Fidel Castro to power, ties between the two countries severely deteriorated. Washington broke diplomatic relations with Havana in 1961 as Cuba started to build close relations with the Soviet Union. Hostilities increased with the Cuban missile crisis in October 1962, that triggered a crisis between the Soviet Union and the U.S. Since then, the U.S. has imposed harsh restrictions on Cuba up until Obama was elected president in 2008. The two countries announced that they started the normalization process in December 2014 to cooperate and improve formal diplomatic relations. In April, the pair held a historic first meeting in Panama after 54 years. The normalization process included the opening of embassies in each other's countries, a breakthrough prisoner exchange and easing of restrictions on commerce. Last week, JetBlue, a budget-friendly airline, added a direct flight service from JFK Airport in New York City to Havana and the world's largest cruise shipping company, Carnival Corp, said it has received approval from the U.S. government to offer trips to Cuba from Miami, which is expected to start early next year.
Last Update: Jul 13, 2015 10:32 pm
RELATED TOPICS