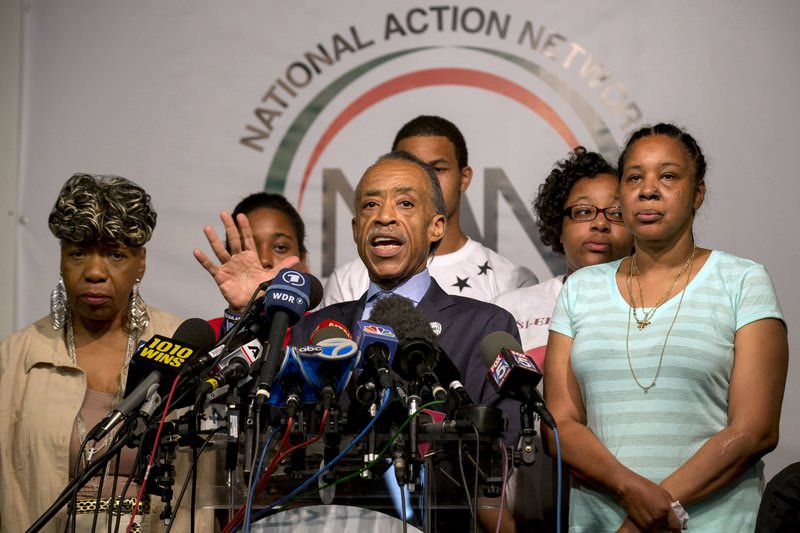 Rev. Al Sharpton speaks with the family of Eric Garner during a news conference in New York July 14, 2015 (Reuters Photo)
by Jul 14, 2015 12:00 am
The family of a black father of six who died after being held in an illegal police chokehold urged the federal government to take up the case Tuesday, after reaching a $5.9 million settlement.

Eric Garner's death in July 2014 was the first in a year of high-profile, racially-charged incidents in which white officers have been accused of using unreasonable force or being too quick to fire at black suspects.

The deaths have fueled nationwide protests, bitter debate about racism and demands for structural reforms to police practices.
The city of New York announced a settlement with the Garners on Monday, nine months after the family took steps towards seeking $75 million in damages.

Garner's loved ones and civil rights campaigner Al Sharpton urged the US federal government at a news conference to take up the case and to hold the white police officers accountable for his death.

"This does not represent justice. We call on the Department of Justice and (US Attorney General) Loretta Lynch to deliver justice for my father," said daughter Erica Garner.

"Justice is indictments and a fair trial."

Garner's family and Sharpton also called on supporters to join them in a public rally in New York on Saturday to commemorate the first anniversary of Garner's death and to campaign for justice.

"They treated my husband like an animal," widow Esaw Garner said. "I think they need to do something about that asap, because we're losing our family members."

The 43-year-old was wrestled to the ground for allegedly selling illegal cigarettes on New York's Staten Island.

He lost consciousness at the scene and was pronounced dead after being taken to the hospital. Chokeholds are outlawed by New York police.

The protest movement will not end until policing practices are structurally changed with federal intervention, Sharpton said.

"It is about justice," Sharpton added. "You will never be able to fill the void of a life taken with money."

New York comptroller Scott Stringer said the settlement was not an admission of liability, but "in the best interests of all parties."

The medical examiner's office classified Garner's death as a homicide but a grand jury refused to prosecute the white officer who deployed the fatal chokehold.

The family had sought damages for "negligence, recklessness and carelessness," naming eight officers, the city and the New York police department.

New York has since begun a pilot program equipping police officers with body cameras to record their behavior towards the public.