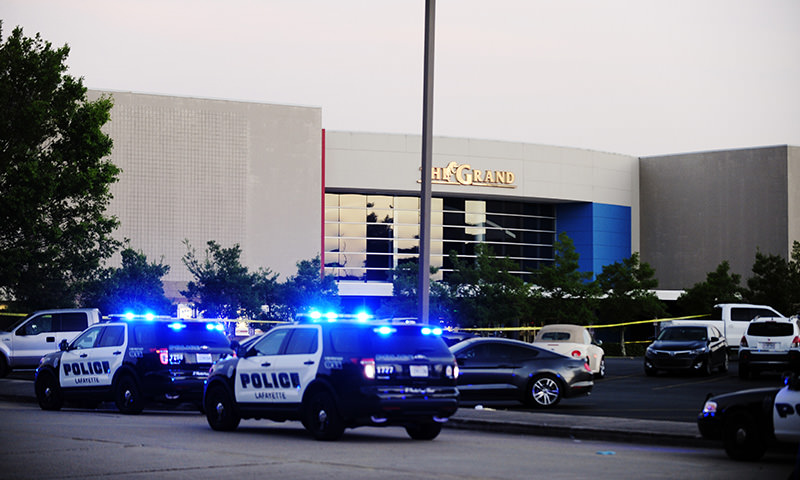 by Associated Press Jul 24, 2015 12:00 am
The movie theater gunman who stood up about 20 minutes into the showing of a popular comedy in Louisiana and began firing into the crowd, killing two people, was described as a drifter from a nearby state whose escape plan was thwarted by police officers who arrived almost immediately, authorities said Friday. The gunman killed himself.

Thursday's incident was the latest of mass shootings in the United States and the second in three years at a movie theater. While the shootings have shocked the nation, they have not led to major changes in gun control laws in the United States, where many Americans see gun ownership as a fundamental, constitutionally protected right.

Nine people were wounded in the evening attack in the city of Lafayette. The gunman, identified as 59-year-old John Russel Houser, fired 13 times from a handgun, police said. He had parked his car by the theater's exit door and initially tried to escape by blending into the fleeing crowd, but turned back when he saw police heading inside from the parking lot, authorities said. Officers tailing him back into the theater then heard a single gunshot and found him dead inside, police said.

Authorities did not release a motive. They said Houser, who comes from the state of Alabama, had been in the Lafayette area since early July, staying at a motel where they found disguises, including glasses and wigs.

Police said the gunman was by himself and started the rampage by shooting the two people sitting in front of him.

At least one theatergoer described the attack, saying an older man stood up about 20 minutes into the 7:10 p.m. showing of the movie "Trainwreck" and began shooting.

"We heard a loud pop we thought was a firecracker," Katie Domingue told The Advertiser, a local newspaper.

"He wasn't saying anything. I didn't hear anybody screaming either," said Domingue, who added that she heard about six shots before she and her fiancÃ© ran to the nearest exit, leaving behind her shoes and purse.

Stories of heroism immediately began to emerge with presidential hopeful Louisiana Governor Bobby Jindal, who traveled to the scene within hours of the shooting, telling reporters that a teacher who was in the theater jumped in front of a second teacher, saving her life. The second teacher then managed to pull a fire alarm to alert other moviegoers, he said.

"Her friend literally jumped over her and, by her account, actually saved her life," Jindal said.

President Barack Obama was briefed on the shooting while on his way to Africa for a two-nation visit, the White House said.

The shooting took place a week after the man who shot and killed 12 people at a movie theater in Colorado in 2012, was convicted and on the very day a jury said his attack was cruel enough to consider sentencing him to death.

Nine people ranging in age from their late teens to their late 60s were wounded, Craft said. At least one of those was in critical condition and being operated on at an area hospital, he said. Police said there were about 100 people inside the theater at the time of the shooting.

Early Friday, about a dozen law enforcement personnel were gathered at a motel in Lafayette to investigate whether the shooter had stayed there, officials said.

"Trainwreck" star Amy Schumer sent a tweet: "My heart is broken and all my thoughts and prayers are with everyone in Louisiana." The comedy stars Schumer as a magazine writer who decides to live a life of promiscuity, but in spite of her best efforts, finds herself falling in love with one of her interview subjects.

Gov. Jindal called the shooting "an awful night for Louisiana."

"What we can do now is we can pray," Jindal said. "We can hug these families. We can shower them with love, thoughts and prayers."

Landry Gbery, 26, of Lafayette, was watching a different movie at the time of the shooting when the lights came up and a voice over the intercom told everyone there was an emergency and they needed to leave.

Gbery said he never heard gunshots, and assumed the emergency was a fire until he got outside and saw a woman lying on the ground.

"I was really anxious for everybody at that point," Gbery said. "Fortunately I was lucky. I took the right exit."

The Louisiana shooting occurred three years after James Holmes entered a crowded movie theater in suburban Denver and opened fire during the premier of a Batman film, killing 12 people and wounding 70 others.

A jury last week quickly convicted Holmes on 165 counts of murder, attempted murder and other charges, rejecting defense arguments that he was insane and suffering delusions.