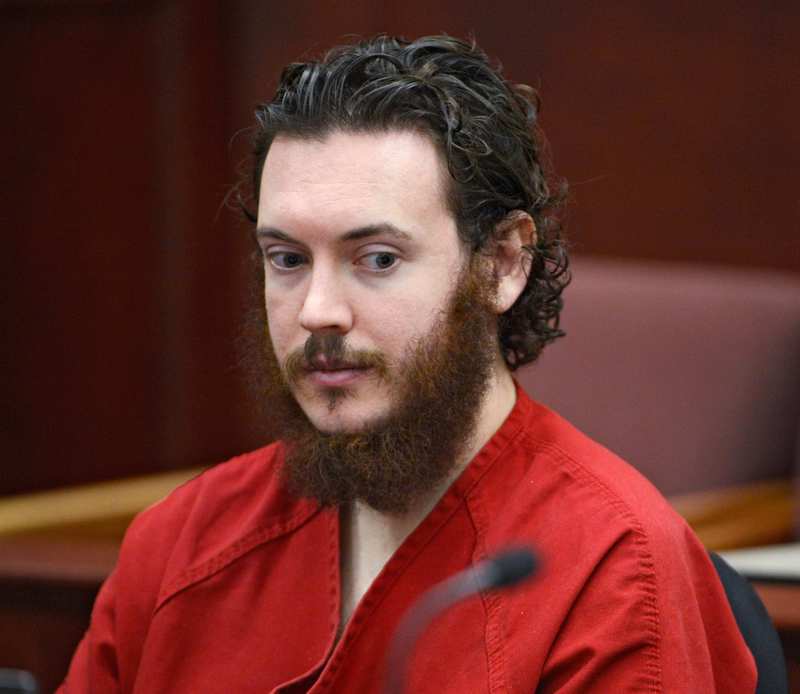 James Holmes sits in court for an advisement hearing at the Arapahoe County Justice Center in Centennial, Colorado (Reuters Photo)
by Aug 08, 2015 12:00 am
A Colorado jury sentenced movie rampage gunman James Holmes to life without parole on Friday, rejecting the death penalty for the 27-year-old who entered a midnight screening of a Batman film wielding a semi-automatic rifle, shotgun and pistol and killed a dozen people.

After less than a day of deliberations, and in a surprise to many legal experts and those in the packed courtroom, the jurors said they were unable to reach a unanimous decision condemning Holmes to execution. They found him guilty last month on all counts for his July 20, 2012 massacre. Seventy people were also wounded.

Holmes showed no reaction. The former neuroscience graduate student stared straight ahead with his hands in his pockets as the judge announced the decision.

The verdict brings to an end an often-delayed, lengthy, and high-profile trial just a little more than three years after his rampage in a suburban Denver multiplex put a spotlight on gun control, mental illness and security in public spaces.

Sandy Phillips, whose daughter Jessica Ghawi was murdered by Holmes, commiserated outside the courtroom after the verdict with a wheelchair-bound survivor, Caleb Medley.

"Justice is not served. Sorry, Caleb," she told him. As two members of Holmes' court-appointed defense team walked past, Phillips said: "I wonder how it feels to save the life of a mass murderer? Good job."

Nine jurors were in favor of the death penalty, a member of the panel said later. One was against execution, and the other two were on the fence, she said, without giving her name.

"I think primarily it was the mental illness," Juror 17 told reporters, referring to the reasoning given by the hold-out.

Because the jurors could not agree, Holmes serves a mandatory life sentence with no possibility of parole. They would have had to be unanimous for a death penalty to be imposed. The defense had said Holmes suffers from schizophrenia and was not in control of his actions.

In his closing argument to the jury, District Attorney George Brauchler had argued that the gunman deserved to die for the "horror and evil" he wrought inside the screening of "The Dark Knight Rises" at the Century 16 multiplex in Aurora.

Dozens of wounded survivors testified during the trial about how they attempted to hide from his hail of bullets, some of them steel-penetrating rounds, or stumbled over the bodies of loved ones as they tried to flee.

Prosecutors said Holmes aimed to slaughter all 400 theater goers. But he failed to kill more, they said, in part because a drum magazine he bought to boost his firepower jammed.

Brauchler told a news conference after the verdict that he was disappointed and had failed. But he thanked the jurors for doing "a hell of a job" under intense scrutiny.

"I don't think there's any doubt that he got what he wanted," the prosecutor said of the gunman.

The proceedings against Holmes began in late April and reached penalty phase closing arguments on Thursday after 60 days of trial, 306 witnesses, and the introduction of nearly 2,700 pieces of evidence.

While the jury rejected Holmes' plea of not guilty by reason of insanity during the guilt phase of the trial, defense lawyer Tamara Brady had said all the doctors the panel heard from in court agreed that he was nonetheless seriously mentally ill.

In her closing argument, Brady had asked the jurors whether they were ready to sign the death warrant of a mentally ill person, and she said they would have to live with that decision for the rest of their lives.

Holmes had remained mostly expressionless throughout the trial, occasionally turning to look when a photograph of himself appeared on a court television. His attorneys say his "aloof or distracted" demeanor is caused by anti-psychosis drugs he is given which treat, but do not cure, his mental illness.

It was not immediately clear where Holmes will serve his life sentence. He could be transferred out of state.

Holmes graduated with honors from the University of California, Riverside, and had no previous criminal record. But he had been seeing a school psychiatrist and dropped out of a graduate program at the University of Colorado's Anschutz Medical Campus in Aurora just weeks before the attack.

He bought a ticket for the screening before slipping out to his car behind the building, and changing into what prosecutors called a "kill suit" of ballistic helmet, gas mask, and head-to-toe body armor.

He returned and threw a teargas canister into the theater, then opened fire. Police officers arrested Holmes outside. When asked if he had an accomplice, he replied: "No, it's just me."

He declined to testify in his own defense.