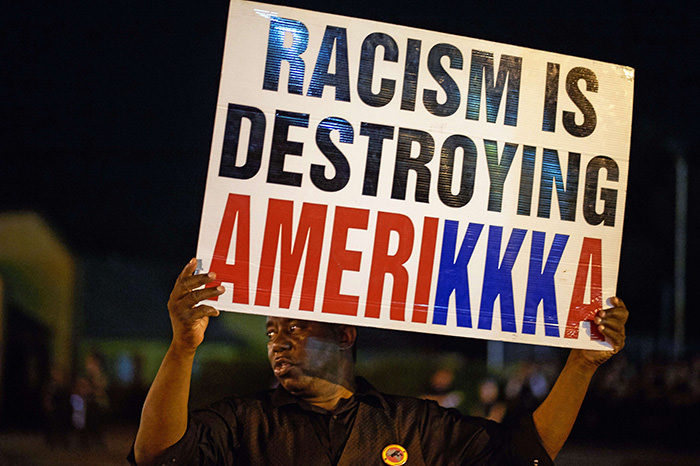 A man holds a sign during a civil disobedience action on West Florissant Avenue in Ferguson, Missouri on August 10, 2015
by Compiled from Wire Services Aug 14, 2015 12:00 am
A state of emergency in the racial flash point city of Ferguson, Missouri was extended Thursday despite two nights of calm, officials said.

St. Louis County declared a state of emergency after peaceful protests marking the first anniversary of the police shooting of black teen Michael Brown devolved into violence and looting on Sunday night.

Tyrone Harris, 18, was shot by police after allegedly opening fire during the chaos.

While Ferguson was calm with no arrests reported on Tuesday and Wednesday, a county spokesman told AFP the state of emergency would be extended until at least Friday as a preventative measure.

The death of Brown and a grand jury's decision to spare the white officer from criminal charges led to a wave of demonstrations that boiled over into rioting and arson at times and spawned sympathy rallies across the country.

Tensions increased after darkness fell on Monday, with some demonstrators throwing objects at officers who pushed back with shields and threatened arrests. Others urged protesters on the street to maintain order.

"Last night was pretty out of control at times. Unfortunately, all the good work that's happening on both sides of the street has been marred by violence," he said.

The violence, according to Belmar, erupted Sunday when two groups of agitators apparently began shooting at each other, disrupting what had been peaceful demonstrations. At one point, a gunman darted across a parking lot and was confronted by four officers who pulled up in an unmarked vehicle.

The officers wounded the suspect in an exchange of gunfire, according to police.

Prosecutors charged the man, Tyrone Harris, who was in critical condition in a hospital, with four counts of assault on law enforcement, five counts of armed criminal action, and one count of shooting at a vehicle.

Harris's father said his son did not have a gun.

"He was running for his ... life because someone was shooting at him," Tyrone Harris, Sr., said in a telephone interview from his St. Louis-area home.

The younger Harris was out on bail awaiting trial on charges of stealing a motor vehicle, theft of a firearm and resisting arrest. He was charged with those crimes on Nov. 5 and released after posting a $30,000 bond on Dec. 19, records showed.