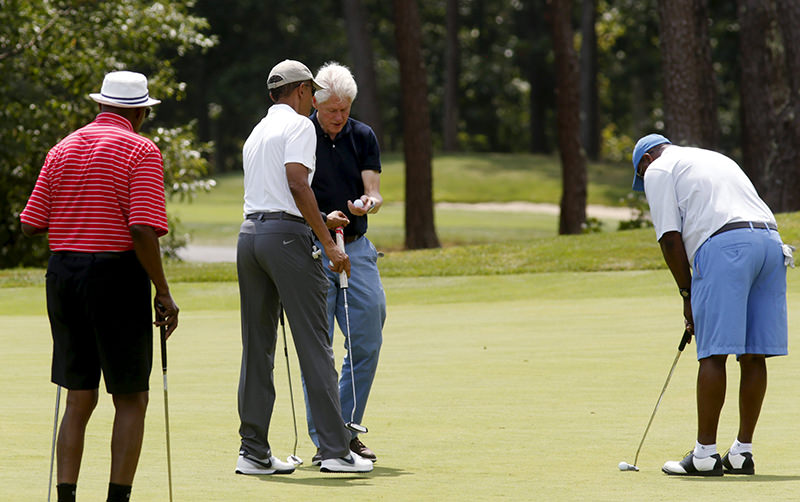 The birthday bash reunites Obama and his former secretary of state, Hillary Clinton, the 2016 Democratic presidential candidate who is under fire for using a private email server during her time as the top U.S. diplomat.

Obama is vacationing with his family on the Massachusetts island of Martha's Vineyard and has spent much of the past week on the golf course. Jordan, who is turning 80, and former U.S. Trade Representative Ron Kirk rounded out the golf foursome.

The current and former U.S. presidents could be seen chatting amiably and gesturing with their hands while starting their game.

Wearing slacks and a white shirt, Obama waved and smiled at journalists who were allowed to take pictures as the men played.

Obama and Clinton have golfed together at least three times since the current president entered office, including January 2013, shortly after Obama's re-election.

Obama and the former president overcame a once-tense relationship stemming from the 2008 Democratic presidential primary race in which the then U.S. senator beat the former first lady for their party's nomination.

Bill Clinton campaigned hard for Obama's re-election in 2012 and Obama, while not endorsing anyone yet in the 2016 race, has expressed his admiration for Hillary Clinton, who is making her second White House bid and is the Democratic frontrunner.

The Obamas and Clintons crossed paths last year on Martha's Vineyard at a celebration for Jordan's wife, Ann.

That event came just after the former secretary of state criticized her one-time boss's foreign policy vision, prompting an apology and a pledge to reconcile by "hugging it out."

Clinton comes to Martha's Vineyard fresh from a campaign stop in Iowa, where she pushed back against criticism from Republican candidate Jeb Bush that Obama's policies on Iraq created instability that led to the rise of the Islamic State militant group.

Obama's victory in the 2008 Democratic primary contest in Iowa helped propel him to beat Clinton in that year's race.