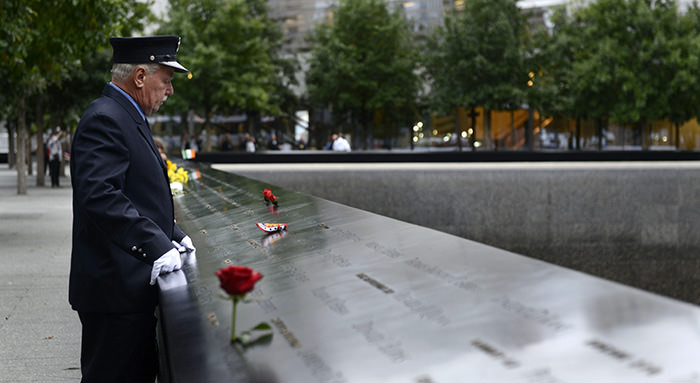 A firefighter pauses at a loved one's name along the South Pool at the National September 11 Memorial on the 14th anniversary of the 9/11 terror attacks in New York
by Associated Press Sep 11, 2015 12:00 am
Victims' relatives began marking the 14th anniversary of Sept. 11 in a subdued gathering Friday at ground zero, with a moment of silence and somber reading of names.

Hundreds of victims' relatives fewer than thronged the ceremonies in their early years gathered, carrying photos emblazoned with the names of their lost loved ones as they remembered the day when hijacked planes hit the World Trade Center's twin towers, the Pentagon and a field near Shanksville, Pennsylvania.

"We come every year. The crowds get smaller, but we want to be here. As long as I'm breathing, I'll be here," said Tom Acquaviva, 81, who lost his son, Paul Acquaviva, a systems analyst who died in the trade center's north tower.

For Nereida Valle, who lost her daughter, Nereida De Jesus, "It's the same as if it was yesterday. I feel her every day."

President Barack Obama and first lady Michelle Obama stepped out of the White House at 8:46 a.m. when the first plane hit the north tower to observe a moment of silence. Later Friday, President Obama was scheduled to observe the anniversary with a visit to Fort Meade, Maryland, in recognition of the military's work to protect the country.

The Flight 93 National Memorial near Shanksville in western Pennsylvania was marking the completion of its visitor center, which opened to the public Thursday. At the Pentagon, Defense Secretary Ash Carter and other officials were joining in remembrances for victims' relatives and Pentagon employees.

After years of private commemorations at ground zero, the anniversary now also has become an occasion for public reflection on the site of the terror attacks.

An estimated 20,000 people flocked to the memorial plaza on the evening of Sept. 11 last year, the first year the public was able to visit on the anniversary. The plaza was to open three hours earlier after the anniversary ceremony.
Last Update: Sep 11, 2015 4:36 pm
RELATED TOPICS