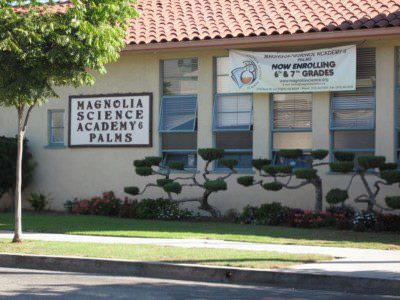 Magnolia Science Academy 6, one of the 8 Magnolia schools based in Los Angeles, United States
by Daily Sabah Sep 12, 2015 12:00 am
Magnolia Science Academy No. 3, a U.S.-based charter school allegedly affiliated with the Gülen Movement has recently been shaken with the discovery of inappropriate communications between a teacher –who has been arrested- and a student who is under the age of 18.

According to reports, Mark Falkowski, who is a 28-year-old history student at the school, which is located in South Orange County in Los Angeles, has been arrested on suspicion of having a sexual relationship with a minor, following the discovery of inappropriate communication records with the student, dating back to 2014.

Orange County sheriff's Lt. Jeffrey Hallock has reportedly said that the teacher and the student, who is under the age of 18 were still involved in a sexual relationship, even though she currently lives out of state.

Investigators have noted that Falkowski also coaches a female youth hockey team and suspect that there may be other victims.
He was held on a $100,000 bail, and more charges could be laid according to reports.

In 2014, the Federal Bureau of Investigation raided 19 charter schools affiliated with the Gülen Movement in Ohio, Indiana and Illinois for reasons allegedly related to crimes linked to education tenders.

The movement's first school was established in Ohio in 1999; currently, the Gülen Movement operates 140 charter schools in 26 states in the U.S.

Another charter school was shut down in 2011 for bribery charges.

Their schools have faced closure elsewhere in the world. Azerbaijan, a close ally of Turkey, shut down schools the movement operates in the country shortly after Erdoğan visited, as did Gabon and Senegal. In January, Tajikistan announced that it will not extend the agreement it made with the Gülen Movement over permission to operate schools in the country. Kosovo, Congo, Kazakhstan, Japan and Somalia have launched processes to close the movement's schools.

Activities and operations of the Gülen Movement in the U.S. and Turkey have been scrutinized by a number of American media outlets which question the movement's motives, opacity and why the U.S. government is providing refuge to Fethullah Gülen, who is currently facing numerous charges including treason and extradition.

The movement, led by Fethullah Gülen who lives in self-imposed exile in the U.S. is accused of wiretapping thousands of people including government officials and encrypted phones. It has been accused of infiltrating state institutions in Turkey and trying to overthrow the government. Referred to as the the Gülenist Terror Organization (FETÖ), the movement is seen as a threat against Turkey's national security. Government officials have continuously expressed their determination to continue to lawfully fight the Gülen Movement, whose followers are accused of infiltrating state institutions to gain control of state mechanisms and illegal wiretapping, forgery of official documents and espionage.