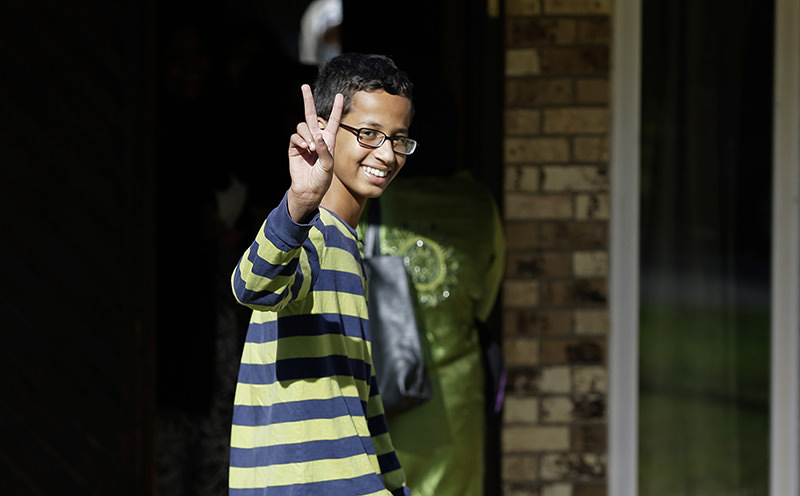 Ahmed Mohamed, 14, gestures as he arrives to his family's home in Irving, Texas, Thursday, Sept. 17, 2015. Ahmed was arrested Monday at his school after a teacher thought a homemade clock he built was a bomb. (AP Photo)
by Anadolu Agency Sep 19, 2015 12:00 am
Ahmed Mohamed, the Muslim teen thrust into the international spotlight after he was arrested when a teacher mistook his homemade clock for a bomb, hopes for the end of racial discrimination and Islamophobia.

The ninth-grader says he felt the prejudicial attitude of the police when a black officer said, "Yup, that's who I thought it was" during his initial encounter with Ahmed.

"I asked to call my parents, they told me you can't call your parents. I asked for a lawyer they said you're too young to have a lawyer," Ahmed told Anadolu Agency. "They violated my rights. Even though I am a minor I still have rights under the Constitution, the First Amendment, in the Constitution, the Bill of Rights."

Ahmed said he believes he was mistreated most probably because of his color or religion. "I hope to get not only rid of Islamophobia but also I hope to get rid of racial discrimination," he said.

Ahmed was handcuffed and led out of MacArthur High School in Irving, Texas, by police Monday when a teacher, whom he took the clock to show, mistook it for a bomb.

Despite insisting the device was nothing but a clock, police rejected Ahmed's explanation and demanded "a broader explanation" of the device's function before ordering him sent to a juvenile detention center, charged with building a hoax bomb. He was cleared of all charges days later.

Initially afraid at his sudden circumstances, the teen who hopes to one day attend Massachusetts Institute of Technology, said the support he has received from the likes of President Obama who invited him to the White House to show off his invention; an invite from NASA to operate its Mars rover; and an internship offer from Twitter, has given him strength through his ordeal.

"I don't feel scared anymore; actually I feel they are scared of me now," he said.

And even Sudan's President Omer al-Bashir, whom Ahmed's father has run against for the country's leadership, has invited the budding Einstein for a visit, according to the elder Mohamed.

"I will be going to White House soon," Ahmed said but did not give details of his visit to Washington or any other invitations.

Ahmed's father, Mohammed El-Hassani Mohamed, doesn't understand why his son was treated in the manner in which he was by police.

"It's strange that they confused a clock with a bomb," he said. "They called me. When I got there, they told me 'your son has built a hoax bomb' and I looked at it and I said, 'that is not a hoax bomb.' I told them you are police you can know the difference between a bomb and the alarm clock." That is ridiculous that is a shame.

El-Hassani Mohamed said police treated his son as an adult criminal, rather than a school child, when they placed his arms behind his back, handcuffed and held him.

"He was humiliated, and mistreated," El-Hassani Mohamed said. "Every one will get scared if he finds five police officers around him, particularly a 14-year-old-child."

Ahmed did not sleep well for three days following his ordeal and his appetite was not good during that time, his father said, who added that his son will not return to McArthur High School.

Ahmed is currently undergoing home schooling as the family considers his educational options.

"When somebody says you can't do something you can pretty wrong them by doing it," Ahmed said. "Don't let the color of your skin and your religion stop you from being who you are," the precocious 14-year-old advised other youngsters. "It didn't stop me. It won't be my first invention, it's not my last."
Last Update: Sep 19, 2015 10:26 am
RELATED TOPICS