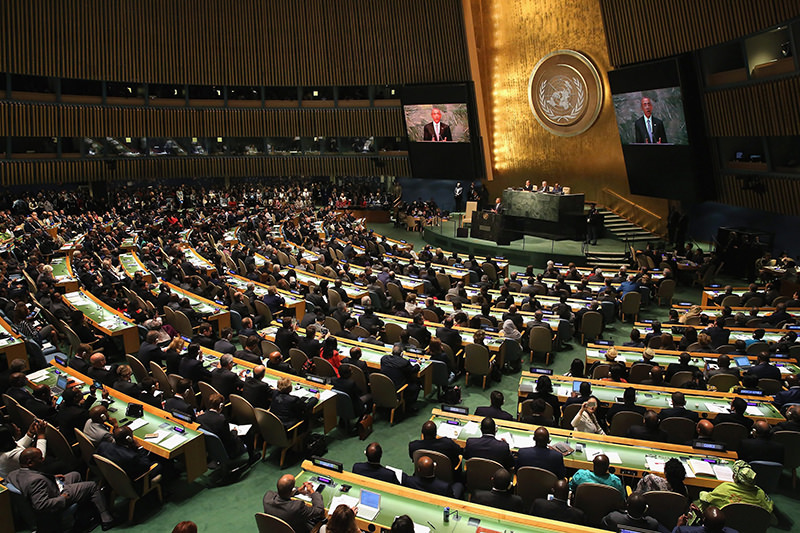 Obama said the work of the United Nations remains incomplete seven decades after its founding and warns that "dangerous currents risk pulling us back into a darker, more disordered world."

Addressing the U.N. General Assembly gathering of world leaders, Obama spoke of leaders who believe power is a "zero sum game," or that stronger states must impose their will on weaker ones, or that individual rights don't matter and order must be imposed by force.

Obama denounced those who support leaders like Syrian President Bashar Assad, calling him a "dictator" and accusing him of slaughtering children.

The barb, a direct attack on Russia and Iran for their ongoing military backing for Syria's beleaguered regime, came shortly before Russian President Vladimir Putin was to speak. Obama said some states prefer stability over the international order mandated by the U.N. Charter, and try to impose it by force. "We're told that such retrenchment is required to beat back disorder, that it's the only way to stamp out terrorism or prevent foreign meddling," he said. "In accordance with this logic, we should support tyrants like Bashar al-Assad who drops barrel bombs to massacre innocent children, because the alternative is surely worse."

Russia and Iran have argued that world powers should support the Assad regime, at least until Syrian forces manage to defeat ISIS.
Obama said he was nevertheless "prepared to work with any nation, including Russia and Iran, to resolve the conflict." He said international cooperation is vital for solving the world's problem and warned U.N member countries of the risks of failing to work together to solve world problems.
Obama also criticized Putin just hours before he was set to meet with him. He said the world cannot stand by while Russia violates Ukraine's integrity and sovereignty. He said if there are no consequences for Russia's annexation of Crimea, it could happen to any other country in the United Nations. Obama also added that they do not want to go back to the Cold War era. He said Russia's state-controlled media depict recent events as an example of a resurgent Russia and that view is shared by many U.S. politicians who think the world is in a new Cold War, but he assured that it is not true.

Obama said the world's nations cannot go back to the "old ways of conflict and coercion" and that "we will all suffer the consequences" for failing to work together more effectively.

Meanwhile, U.N. Secretary-General Ban Ki-Moon for the first time has called for the situation in Syria to be referred to the International Criminal Court.

In his state of the world address to leaders from the U.N.'s 193 member states, Ban said "innocent Syrians pay the price of more barrel bombs and terrorism" and there must be no impunity for "atrocious" crimes.