Giant U.S. cargo ship vanishes with 33 people aboard in the mysterious Bermuda Triangle 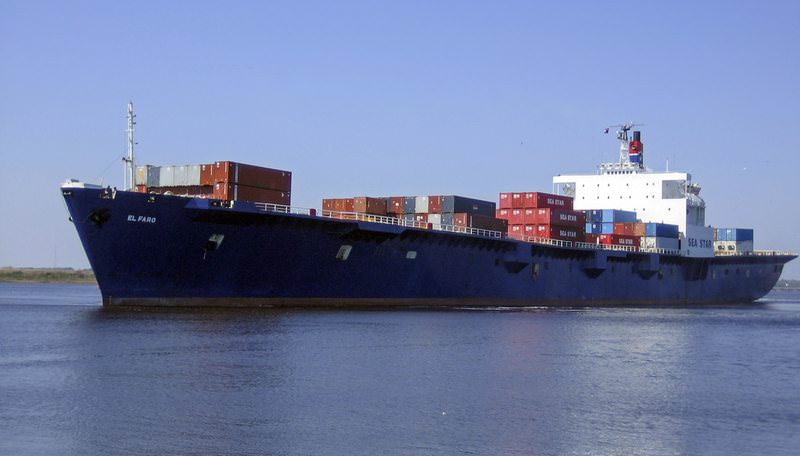 An undated handout photograph shows the container ship El Faro that according to the US Coast Guard has gone missing in Hurricane Joaquin. (EPA Photo)
by daily sabah
Oct 04, 2015 12:00 am

An empty life vest and three life rings were all that were left from the cargo ship El Faro, which was last seen on Thursday morning sailing into Hurricane Joaquin in the waters of northeastern Crooked Island in the Bahamas-right inside the mysterious Bermuda Triangle.

The U.S. Coast Guard said early Sunday afternoon that its aircrews also spotted "containers and an oil sheen" in the sprawling search area. But they have not yet been able to confirm whether the debris and oil is from El Faro.

With 28 U.S. citizens and five Polish crew members, the 735-foot ship's captain had inexplicably headed right into the hurricane on his way to Puerto Rico's San Juan from the port of Jacksonville, in the state of Florida, the U.S.

Coastguards are reported to have last contacted the ship on 07:30 a.m. on Thursday when the captain and crew reported that El Faro was losing propulsion and taking in water. After that, no further distress calls were received.

By Sunday two more life rings and a life vest was found in the waters of the Bahamas, raising hope that the search is commenced in the right area and that 33 missing people can be still alive.

C-130 airplanes and helicopters have been searching the area since Thursday, covering more than 30,000 square miles.

Reported as a Category 4 on a scale of 1 to 5, Hurricane Joaquin has unleashed heavy floods, destroying hundreds of houses and uprooting many trees. Although there have been no reports of injuries of fatalities so far, the Bahamas National Emergency Management has reported that there has been a lot of property damage in the area.

Warnings have been issued for the entire U.S. East Coast as dangerous rip currents are expected through the weekend. Bermuda is also currently on hurricane watch as a tropical storm is forecasted, but the storm is expected to lose strength in the upcoming days.