US refuses to cooperate with Russia over Syria, Defense Secretary says 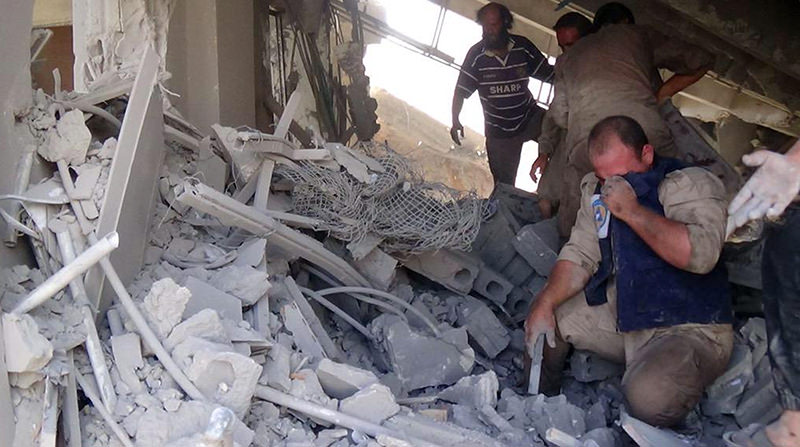 This Wednesday, Sept. 30, 2015 file image released by the Syria Civil Defence, a volunteer search and rescue group, shows the aftermath of an airstrike in Talbiseh, Homs province (AP Photo)
by French Press Agency - AFP
Oct 07, 2015 12:00 am
The United States will not cooperate with Russia over air strikes in Syria, Defense Secretary Ashton Carter said Wednesday as Moscow ramped up its bombardments in the war-torn country.

"I have said before that we believed that Russia has the wrong strategy -- they continue to hit targets that are not ISIL. We believe this is a fundamental mistake," Carter said, using another name to refer to the ISIS group.

"Despite what the Russians say we have not agreed to cooperate with Russia so long as they continue to pursue a mistaken strategy and hit these targets."

Before Russia began bombing Syria last week, US officials had said they would welcome "constructive contributions" to the US-led coalition attacking ISIS terrorists.

But with the Pentagon convinced Russia is focusing on rebels who oppose President Bashar al-Assad, and not ISIS, military officials see no scope for collaboration.

Moscow claims it is carrying out strikes against ISIS targets.

Carter's comments followed claims from Russia's defense minister, who said Moscow was considering proposals from the US to coordinate operations against ISIS.

"The Russian defense ministry has answered the demands of the Pentagon and is examining in depth American proposals on coordinating operations carried out ... against the terrorist group ISIS on Syrian territory," Russian news agencies cited Igor Konashenkov as saying.

US and Russian officials have held discussions on how to avoid possible accidents with their respective warplanes in action over Syria at the same time.

"What we will do is continue basic, technical discussions on the professional safety procedures for our pilots flying above Syria," Carter added.

"That's it. We will keep the channel open because it's a matter of safety for our pilots."

The Pentagon is gravely concerned about the possibility of its pilots or drones crossing path with Russian planes.

A report Wednesday said Russian jets had shadowed a US drone, but a senior defense official downplayed the seriousness of the incident.

"My understanding is that it was not intentional," the official said, noting the jet came within "a handful of miles" of the drone.


Moscow dramatically intensified its military operations in Syria on Wednesday, with heavy aerial bombing and cruise missile strikes launched from warships in the Caspian Sea that provided cover for a major Syrian army ground offensive in a coordinated attack on rebels.

Russia has said its forces have hit 112 targets since its operations in Syria -- which it insists target ISIS and other "terrorist groups" -- began on September 30.

But Syrian rebels and their backers say a range of opposition fighters, not just terrorists, have been hit.

Carter was speaking in Rome as part of a five-day European tour aimed at thanking allies who are dealing with emerging threats on NATO's southern flank.

He previously visited Spain and will attend a NATO ministerial meeting in Brussels on Thursday.