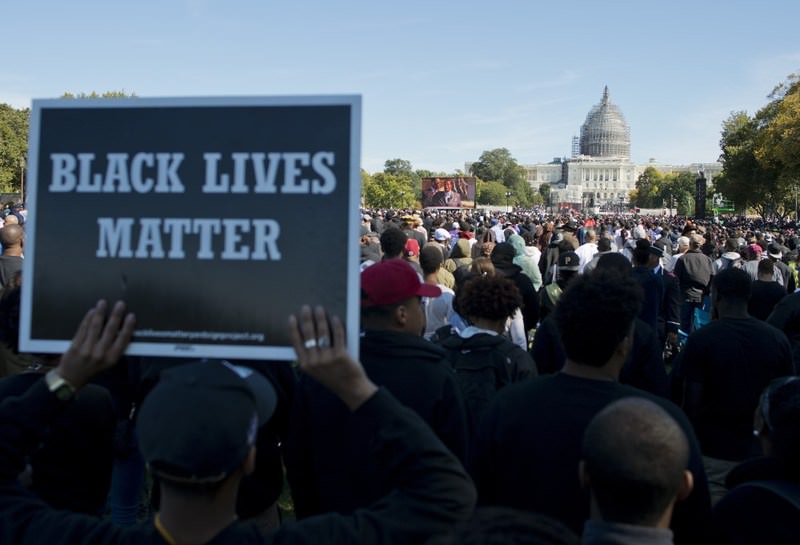 People listen to speeches during the Justice or Else! rally on the National Mall in Washington.
by Daily Sabah with Agencies
Oct 12, 2015 12:00 am

Amid recent racial tensions in the U.S., following the deaths of black people and injustice at the hands of police, thousands of people gathered in Washington to mark the 20th anniversary of the Million Man March

Thousands of black Americans gathered in Washington on Saturday to mark the 20th anniversary of the "Million Man March," renewing their demands for justice reform and greater civil rights.

The demonstration on the National Mall - the grassy, mile-long promenade between the U.S. Capitol building and the Washington Monument - follows a series of high-profile incidents of police violence against black Americans over the past year. The anniversary event gathered people from across the United States hoping to push elected officials to do more to combat social and economic inequalities, as well as violence that disproportionately affects communities of color.

Louis Farrakhan, head of the Nation of Islam black Muslim group, organized both the original 1995 march and this year's "Justice or Else" gathering. Unlike the march 20 years ago, Saturday's protest included a call for justice that encompassed a broad range of overlooked ethnic groups, whereas most participants in the first march were black males. Protesters included entire families and people of various races who heard Farrakhan praise what he described as a new groundswell of black American activism.

"This is not a moment, this is a movement," Farrakhan said during his lengthy, televised address. He singled out the protests in Ferguson, Missouri, after the fatal shooting of unarmed teen Michael Brown after an apparent altercation with a white police officer, as one sign that black Americans were fed up with the status quo. "When the brothers and sisters arose in Ferguson, you didn't have any money, you had a principle, a principle you were willing to suffer for, that you felt was bigger than yourself and life," Farrakhan told the crowd, which looked to be in the tens of thousands. "If we are denied what is rightfully due to us, then there has to be unified action that we take that will force the justice that we seek," he said from a podium near the steps of the U.S. Capitol building. "There must come a time when we say, enough is enough. It must change, and I am willing to do whatever it takes to bring about that change." His message found resonance with speakers and many protesters at the rally, who invoked recent acts of alleged excessive use of police force, including some that proved deadly.

"Twenty years ago, the death of Tamir Rice would have fallen on deaf ears, left for the police to write a false report, and not broadcast for the world to know," organizer Tamika Mallory said, referring to last year's police shooting of a 12-year-old boy in Cleveland, Ohio. She also recalled the now infamous deaths at police hands of Michael Brown in Ferguson, Missouri, and Eric Garner in New York that inspired the "Black Lives Matter" movement, whose slogan was omnipresent on the Mall.

Meanwhile, the Cleveland police was justified in fatally shooting Tamir Rice, the black 12-year-old boy, holding a pellet gun moments after pulling up beside him, according to two outside reviews conducted at the request of the prosecutor investigating the death. A retired FBI agent and a Denver prosecutor both found the rookie patrolman who shot Tamir Rice exercised a reasonable use of force because he had reason to perceive the boy described in an emergency call as a man waving and pointing a gun as a serious threat.

Beyond the growing media attention and accountability, though, there are mixed signs of progress over the two decades since the original march.

The unemployment rate for black men in the U.S. has stubbornly hovered around 8 percent since 1995, twice that of white men. The rate at which black Americans are arrested has declined slightly, but they remain six times more likely than whites to be detained and often face harsher sentences for comparable crimes, according to the National Association for the Advancement of Colored People (NAACP). Barack Obama attended the original Million Man March, prior to being elected America's first black president, but the U.S. leader was in California during the latest protest. The shooting and killing of black Americans by police has a long history in the U.S. Americans have long witnessed the deaths of black people and injustice at the hands of police. Racial tensions have been recently high in the U.S. after several mass shootings and police brutality toward black community. Many Americans have called for the reform of police practices, especially toward black Americans during protests.