Canadian PM Trudeau to be sworn in, announce cabinet with equal number of men and women 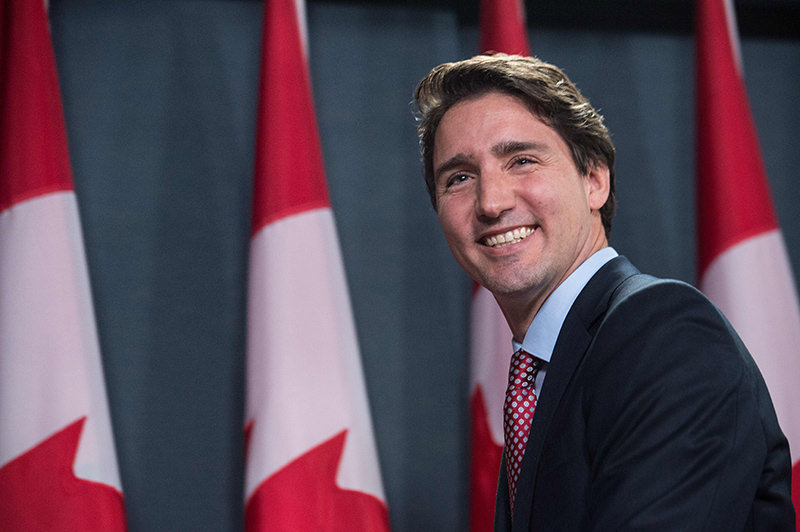 Canadian Liberal Party leader Justin Trudeau smiles at the end of a press conference in Ottawa on October 20 (AFP Photo)
by reuters
Nov 04, 2015 12:00 am
Liberal leader Justin Trudeau will kick off his majority government with some controversy as he is sworn in as Canada's 23rd prime minister on Wednesday by naming an equal number of men and women to a slimmed-down cabinet.

Trudeau, the first son of a prime minister to take office in Canada and the second-youngest in the country's history at 43, has grabbed international attention for his good looks and crowd-loving approach to politics.

His swearing-in ceremony will end a decade of Conservative rule under Prime Minister Stephen Harper, whose party takes up the role of opposition as they search for a new leader.

During the campaign, a senior Liberal Party member wrote a confidential email later leaked to media saying that the cabinet would be cut from 39 members and could go as low as 25.

One Liberal source, speaking on condition of anonymity, said Trudeau's cabinet will be about 30 members or fewer. The identity of the new cabinet will be released as Trudeau is sworn in.

Trudeau has said the leadership team will have an equal number of male and female ministers, which would be a first for Canada, though several other countries - notably France - have also attempted gender parity.

Some critics have already questioned the pledge, noting the Liberals have 50 women and 134 men in their caucus.

"The radical, unspeakable alternative to quotas is: just hire the best person for the job. If it's a man, fine; if it's a woman, fine," wrote National Post columnist Andrew Coyne.

Trudeau spokeswoman Kate Purchase defended the decision, saying "we have an incredible group of women that won their ridings (parliamentary districts)."

Promising a more open and friendly government, the Liberals have invited the public onto the grounds of Rideau Hall to watch Trudeau be sworn in and erected large screens on site so more people can watch.

Trudeau won a surprise majority offering "sunny ways", with a more positive outlook and a willingness to put the budget back into the red to stimulate Canada's flagging economy.
Last Update: Nov 04, 2015 8:33 am