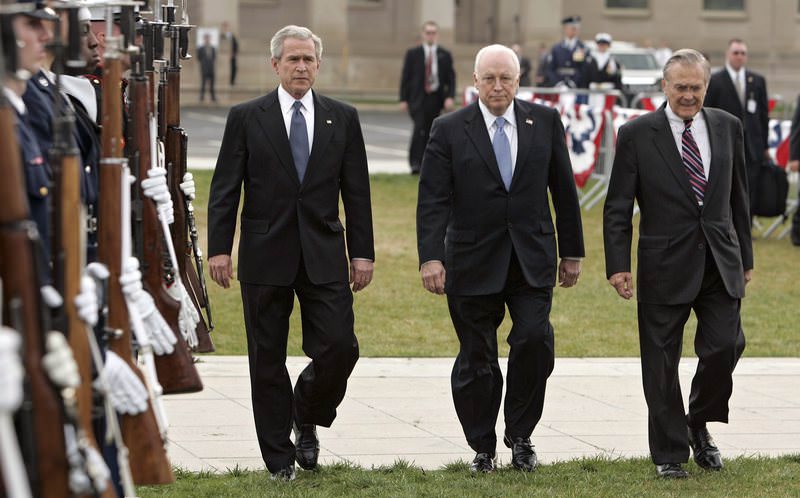 by French Press Agency - AFP
Nov 06, 2015 12:00 am
Former president George H.W. Bush has slammed Dick Cheney as an "iron a**" and Donald Rumsfeld as an "arrogant fellow," in a new book in which he vents publicly for the first time about their influence on his son George's presidency.

Bush, president from 1989-1993, has mostly been silent on issues regarding his son's presidency and the wars in Iraq and Afghanistan.

But in an upcoming biography, he has some choice words for the two men who played a pivotal role in George W.'s 2001-2009 White House, according to the New York Times.

Former vice president Cheney is an "iron a**" who built "his own empire and marched to a different drummer," and who exerted too much of a "hard-line" influence over his son, Bush told his biographer Jon Meacham, the Times said.

And former defense secretary Rumsfeld was an "arrogant fellow," blind to the opinions of others, who "served the president badly," Bush said.

Bush knows Cheney well, as the latter was his secretary of defense during the 1991 Operation Desert Storm, the US-led military push that liberated Kuwait from Saddam Hussein's Iraqi army.

However, as his son's vice president, "he just became very hard-line and very different from the Dick Cheney I knew and worked with," Bush said.

"His seeming knuckling under to the real hard-charging guys who want to fight about everything, use force to get our way in the Middle East."

Yet, Meacham reports that as defense secretary, Cheney commissioned a study on how many tactical nuclear weapons would be needed to take out an Iraqi Republican Guard Division, the Times said, adding that the answer was 17.

Bush speculated that Cheney was influenced by his deeply conservative wife Lynne, whom Bush described as "the eminence grise."

The elder Bush, however, acknowledged that his son was responsible for empowering Cheney and Rumsfeld, and at times used language that was too bellicose.

"I do worry about some of the rhetoric that was out there -- some of it his, maybe, and some of it the people around him," Bush told Meacham, according to the Times.

"Hot rhetoric is pretty easy to get headlines, but it doesn't necessarily solve the diplomatic problem," he said.

"You go back to the 'axis of evil' and these things and I think that might be historically proved to be not benefiting anything," Bush said.

Meacham's biography, "Destiny and Power: The American Odyssey of George Herbert Walker Bush," is to be published next week by Random House.

It comes as another Bush son, Jeb, is running for the Republican presidential nomination, but struggling to gain ground in an election year driven by populist, anti-establishment sentiments that have lifted the fortunes of outsider rivals like Donald Trump and Ben Carson, the current frontrunners.

Commenting on the book Thursday, Jeb Bush said, "My brother's a big boy. His administration was shaped by his thinking, his reaction to the attacks from 9/11."

"I think my dad, like a lot of people, loved George, wanted to try to create a different narrative, just because that's natural to do, right?" Bush added.

The elder Bush, now a frail 91, is the embodiment of a once dominant, now fading white Anglo-Saxon Protestant establishment in Republican politics.

The son of a prominent senator from Connecticut, Bush studied at Yale, was a member of its Skull and Bones secret society, a decorated Navy aviator in World War II, a member of Congress from Texas, ambassador to China, and director of the CIA.

His first run for president was stymied by another outsider, Ronald Reagan, who made him his vice president.

Bush then was elected president in his own right in 1988, for a four-year term that peaked with a swift but inconclusive victory in the 1991 Gulf War.

Meacham, a former Newsweek editor and Pulitzer Prize-winning author, reveals that Bush suffered from a post-victory "letdown" that led him to consider not running for a second term, according to the Times.