Amid protests for minimum wage increase, NY sets the bar to $15 for state workers 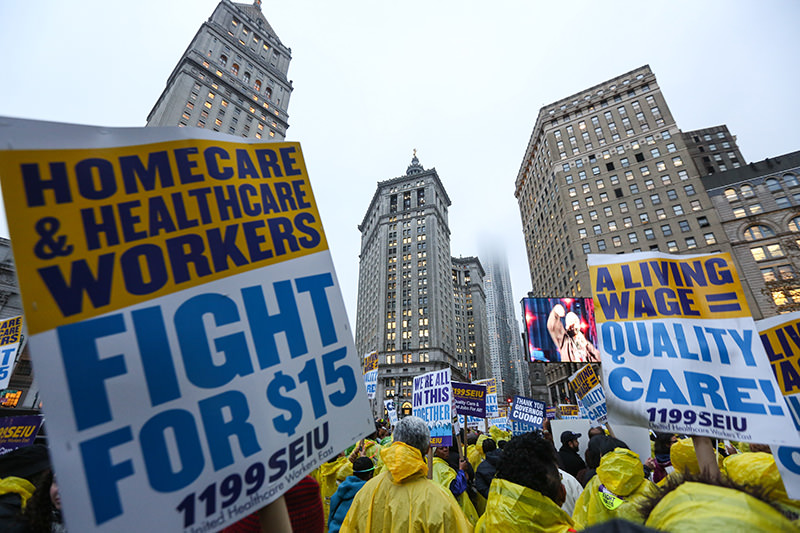 by Compiled from Wire Services
Nov 11, 2015 12:00 am
Amid nationwide protests in various U.S. cities for minimum wage increase, the State of New York will raise the minimum wage for all of its state employees to 15 dollars an hour, Governor Andrew Cuomo said Tuesday, becoming the first U.S. state to set such a high rate for its near 10,000 public-sector workers.

Cuomo said the increase will be implemented gradually, with state workers in New York City earning at least $15 an hour beginning 2019 and those in the rest of the state by July 2021.

"I believe that if you work hard and work full time, you should not be condemned to live in poverty," Cuomo said. "Yet millions of families nationwide continue to be left behind by an insufficient minimum wage - and it's time that changed."

The decision to increase wages for public-sector workers follows a decision by the State of New York State to set the minimum wage for fast food workers at 15 dollars an hour.

Cuomo has proposed raising the minimum wage to $15 across all industries in the state, which would have a direct impact on 2.3 million people statewide.

The State of New York has a population of 19.75 million people with 8.4 million residents in New York City. According to the US Census Bureau, New York's poverty rate stands at 15.9 percent, while New York City's is at 20.3 percent, both above the US national average of 14.8 percent.

Meanwhile, various protesters, mainly the ones working in fast food sector, staged protests aimed at presidential candidates for 2016 elections to back their cause of increasing the minimum wage to $15 per hour. The gathering point of protesters in NYC, backed by health employees, was Foley Square near New York City Town Hall.

Workers from McDonald's, Taco Bell and other chain restaurants protested in more than 270 cities around the country Tuesday to push fast food companies to pay them at least $15 an hour in an ongoing campaign called "Fight for $15." Janitors, nursing home workers and package delivery workers also joined some protests, organizers said.

The campaign began about three years ago and is funded by the Service Employees International Union, which represents low-wage workers. Several protests have been scheduled in front of fast food restaurants, garnering media attention.

This time workers are pledging not to vote for presidential candidates that do not support the campaign. Democratic candidates Hillary Clinton and Bernie Sanders both showed their support through tweets on Tuesday.

The protests are occurring against a backdrop of weak wage growth nationwide. Average hourly pay has increased at roughly a 2.2 percent annual rate since the recession ended more than six years ago.

In the retail, hotel and restaurant industries, average hourly pay for front-line workers the roughly 80 percent who aren't managers or supervisors is below $15. It was $14.90 in the retail industry in October, the Labor Department said last week, and $13.82 for hotel employees. Restaurant workers, on average, earned $11.51 an hour.

Economists have long debated the impact of raising the minimum wage, and some recent research has found that modest increases seldom cost many jobs.

But a jump to $15 an hour would be more than double the federal minimum of $7.25 a much higher increase than what economists have studied. It would also be far above the minimum wage's previous peak of just under $11, adjusted for inflation, in 1968.

McDonald's Corp., based in Oak Brook, Illinois, said in a statement Tuesday that wages at U.S. restaurants it owns increased $1 over the local minimum wage in July, affecting about 90,000 employees. But the vast majority of U.S. McDonald's locations are franchised.

Rival Burger King, which is owned by Canada-based Restaurant Brands International Inc., said it supports "the right to demonstrate" and hopes "any demonstrators will respect the safety of our restaurant guests and employees." It also said its franchisees that own the restaurants make wage decisions, not the corporate company.

Yum Brands Inc., the Louisville, Kentucky-based company behind Taco Bell and KFC, said its employees are paid above minimum wage at its 2,000 company-owned stores.