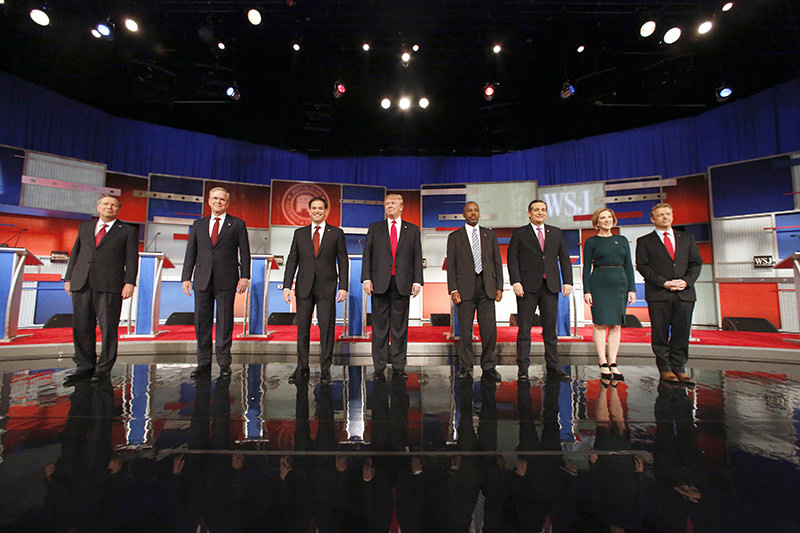 by Anadolu Agency
Nov 11, 2015 12:00 am
A potential no-fly zone in Syria divided Republicans vying for their party's presidential nomination during Tuesday night's debate, echoing divisions far beyond the party.

"We should have a no-fly zone in Syria," said former Florida Governor Jeb Bush. "They are barrel bombing the innocents in that country."

Ohio Governor John Kasich also backed the idea, saying he would support the creation of a safe zone in northern and southern Syria along the borders with Turkey and Jordan.

"Anybody flies in there the first time, maybe they can fly out. They fly in there a second time, they will not fly out," Kasich said. "It also sends many messages in the Middle East that we're still involved."

Businesswoman Carly Fiorina further lent her support to the plan, adding that she would arm Kurdish forces.

But Kentucky Sen. Rand Paul dismissed the creation of a safe zone, saying that it is logistically unfeasible.

"The idea of a no-fly zone" Paul said, "you're asking for a no-fly zone in which Russia already flies. Russia flies in that zone at the invitation of Iraq."

"Realize that you mean that you are going to shoot down Russian planes," he added.

The Kentucky senator apparently confused Iraq with neighboring Syria where Russia is conducting an air campaign against what it says are ISIS targets. The U.S and its allies dispute Moscow's claim, saying that the bulk of its airstrikes target moderate Syrian forces.

"If Putin wants to bomb the hell out of ISIS I am all for it 100 percent," Trump said. "I can't understand how anybody would be against it."

Florida Sen. Marco Rubio said that ISIS would "soon" be in Turkey following its growth beyond the Middle East in Libya, Afghanistan and Pakistan.