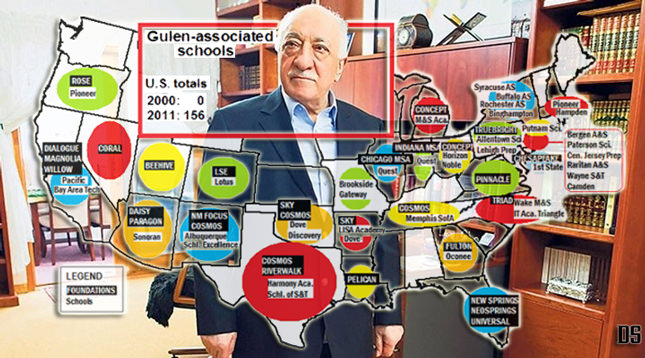 by daily sabah Nov 13, 2015 12:00 am
As the Federal Bureau of Investigation (FBI) continues its investigation on the school chain linked to the controversial Turkish cleric Fethullah Gülen for charges of fraud, there is lttle transparency in who and just how this man became a powerhouse in the education sector of the U.S.

The investigation is looking into allegations that the charter school chain diverted state funds it acquired to individuals and institutions tied with the movement, which faces terror charges in a number of investigations in Turkey, where it is formally called the Fethullahist Terrorist Organization or FETÖ.

The Gülen Movement operates 140 charter schools in 26 states in the U.S. The Gülen Movement's schools have faced criticism from different circles, and the FBI previously raided the Kenilworth Science and Technology Charter School in Louisiana.

Another charter school was shut down in 2011 for bribery charges. Fethullah Gülen, who currently lives in self-imposed exile in Pennsylvania, leads the Gülen Movement. He is accused of orchestrating the Dec. 17 coup attempt and infiltrating Turkish state institutions through Gülenist agents.

The investigation is likely to boost Turkey's cause in its fight against the organization accused of overthrowing the Turkish government. Turkey had already employed an international law firm to assist in a global investigation into the activities of the Gülen Movement, which operates a worldwide network of schools and companies.
Last Update: Nov 13, 2015 5:25 pm
RELATED TOPICS