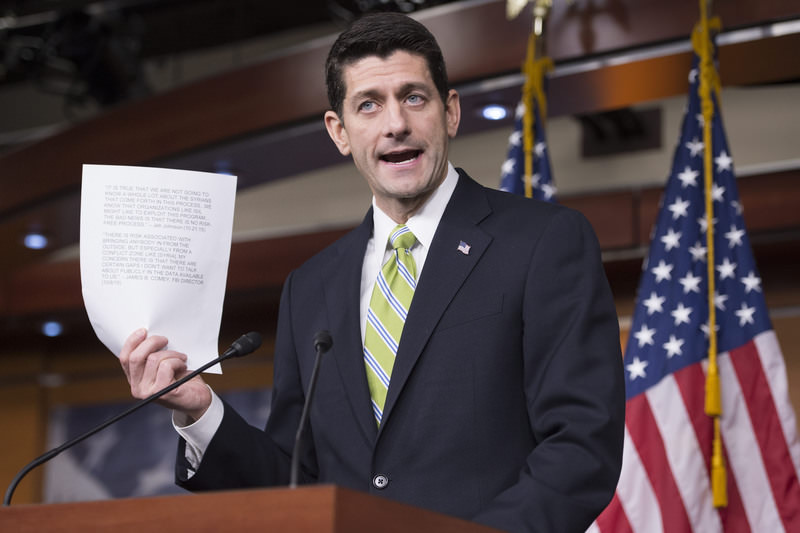 Speaker of the House, Republican Paul Ryan, holds a sheet of paper with quotes from the Congressional testimony of FBI Director James Comey and Homeland Security Secretary Jeh Johnson. (EPA Photo)
by Daily Sabah with Wires
Nov 19, 2015 12:00 am
The U.S. House of Representatives easily passed legislation on Thursday to tighten security screenings for Syrian and Iraqi refugees and suspend President Barack Obama's program to admit 10,000 of them in the next year, defying a White House veto threat.

The vote was 289 to 137 for the measure. The vote was largely along party lines, although dozens of Obama's fellow Democrats broke with the White House to vote for the bill.

The roll call came after White House officials visited Congress and lobbied Democrats to oppose the legislation. Dozens of them ended up joining Republicans, anyway, and supporting the measure.

The curbs would in effect suspend the entry of Syrian and Iraqi refugees into the U.S. for months or years.

Republicans said tighter restrictions are needed following last week's Paris terrorist attacks. Obama and most Democrats said the system was already safe and the U.S. shouldn't abandon its tradition of accepting refugees.However, the measure must first pass the Senate before going to President Barack Obama, who has threatened to veto the measure.

Opposition Republicans, who hold a majority in both chambers of Congress, are calling for a "pause" in Syrian refugee admissions after the Paris attacks. The House vote drew enough support from Obama's left-leaning Democrats to potentially reach the supermajority needed to override a veto.

"If our law enforcement and intelligence community cannot verify that each and every person coming here is not a security threat, then they shouldn't be allowed in," House Speaker Paul Ryan said in a Capitol Hill press conference.

"Right now, the government can't certify these standards. So this plan pauses the programme."

Nancy Pelosi, leader of the Democratic Party's minority faction in the House, said in the chamber's floor debate that the Republican legislation "slams the door on desperate mothers and children fleeing [DAESH] unspeakable violence."

Nebraska Congressman Brad Ashford, a Democrat, voiced support on the House floor for the Republican bill, which he called "a common sense approach to address the legitimate security concerns that my constituents and the American people have expressed to me and are expressing today."

The Paris attacks were a "game-changer" that obligates the United States "to reassess our existing procedures - and that's all this bill does - for admitting and monitoring refugees from countries associated with DAESH," he said.