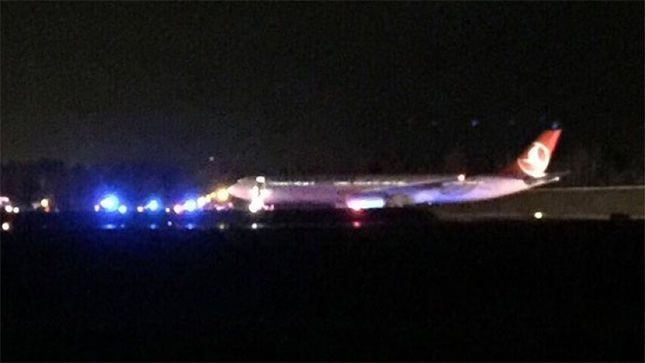 |Brett Ruskin/CBC
by Daily Sabah with AP Nov 22, 2015 12:00 am
The Royal Canadian Mounted Police says it is investigating a bomb threat that caused a Turkish Airlines flight from New York City to Istanbul to divert and land in Canada.

Halifax Stanfield International Airport said on its Twitter feed early Sunday that Flight 2 had landed safely and that police were at the scene.


After searching the plane, police said they did not find threat on the airplane.


The RCMP said the bomb threat was received at 10:50 pm local time. Flight tracking sites show the flight had already taken off from John F Kennedy International Airport in New York by then.

Last Tuesday night, Air France Flight 55 from Dulles International Airport outside Washington was diverted to Halifax after an anonymous bomb threat was phoned in after the plane had taken off.

An FBI statement late Tuesday said authorities had investigated and found no credible threat, and the RCMP said investigators found no evidence of an explosive device.

That threat came after the November 13 attacks in Paris that killed 130 people and heightened security concerns worldwide.
Last Update: Nov 22, 2015 11:40 am
RELATED TOPICS