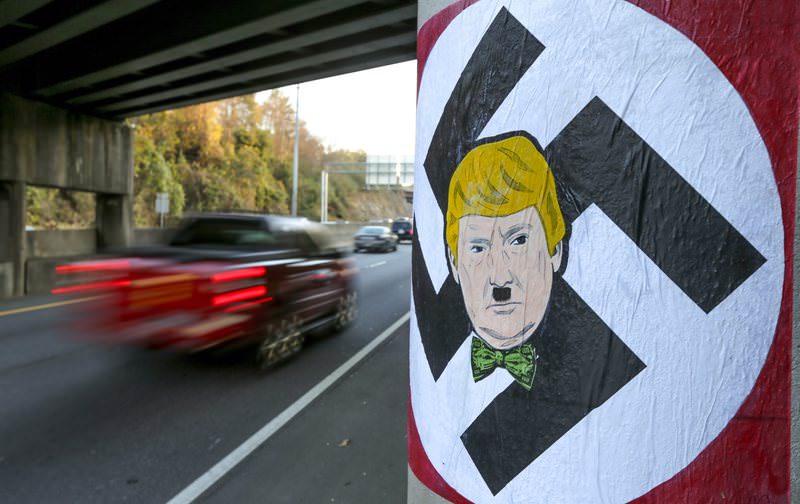 by Daily Sabah with Wires Dec 09, 2015 12:00 am
After calling for all Muslims to be temporarily barred from entering the United States, republican presidential hopeful Donald Trump on Wednesday was the subject of another graphic comparison with Nazi leader Adolf Hitler.

A cartoon of billionaire Trump with a Hitler mustache appeared on a concrete highway bridge support in Atlanta, Sergeant Warren Pickard of the Atlanta Police Department confirmed to dpa.

The image of Trump's face is centered on a black swastika flag, with a 100-dollar bill folded into a bow tie.

A similar image was found along another major highway in the southern U.S. city, Pickard said, noting that the federal Homeland Security Department was notified, while local authorities were trying to find a way to remove the graffiti.

Trump, the frontrunner among a large field of Republicans seeking the conservative party's 2016 nomination, has faced a firestorm of criticism over his proposal, which he first voiced Monday.

He called for "a total and complete shutdown of Muslims entering the United States until our country's representatives can figure out what is going on."

Trump said hatred in the Middle East toward the U.S. "is beyond comprehension" and the ban should be put in place "temporarily" until the country can determine where the hatred comes from.

Upon Trump's ridiculous demand, people of every faith and from every corner of the world have decried the proposal.

Donald Trump's demand also lit up social media on Tuesday, as critics of the proposal around the world took to Twitter and Facebook to express their outrage.

Sentiment toward the outspoken billionaire candidate on Twitter fell sharply, Thomson Reuters data showed, down to negative 12.3 from an average of about negative 5 before the proposal he made on Monday afternoon.
Last Update: Dec 09, 2015 11:32 pm
RELATED TOPICS