Only 163 refugees enough to cheer up Canadians 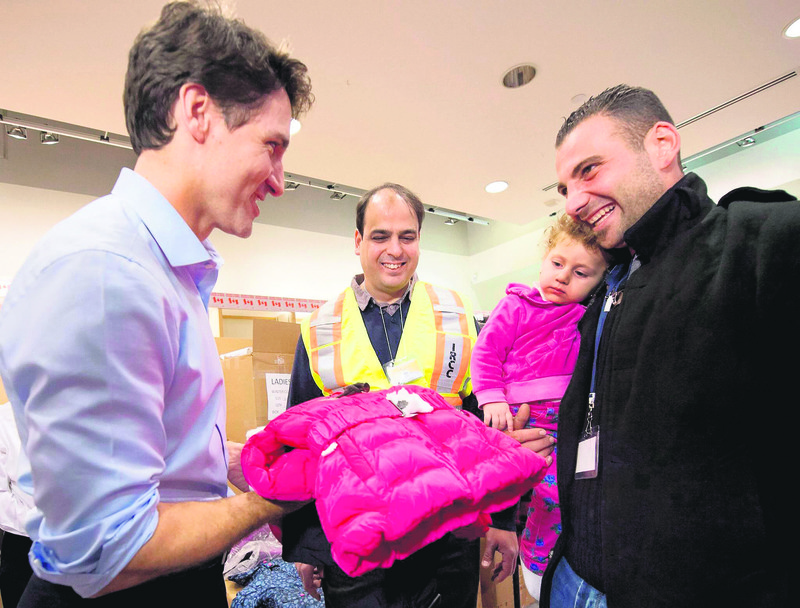 Canadian Prime Minister Justin Trudeau was looking so happy while greeting a Syrian refugee.
by Compiled from Wire Services Dec 12, 2015 12:00 am

Canada has hailed the arrival of 163 Syrian refugees as part of receiving 25,000 Syrian refugees in total. The charismatic Canadian Prime Minister Justin Trudeau welcomed the Syrians at the airport

After months of promises and weeks of preparation, the first Canadian government planeload of Syrian refugees landed in Toronto on Thursday, aboard a military aircraft met by Prime Minister Justin Trudeau who was elected to a surprise majority in October promising to accept more refugees more quickly than the previous Conservative government. "This is a wonderful night, where we get to show not just a planeload of new Canadians what Canada is all about, we get to show the world how to open our hearts and welcome in people who are fleeing extraordinarily difficult situations," Trudeau told airport workers and volunteers standing by to meet the refugees.

Trudeau's Liberal government scaled back the number of Syrian migrants it will accept by year end after the attacks in Paris sparked concern that the election promise to bring in 25,000 by Dec. 31 would not allow enough time for security checks.

The plane carrying 163 Syrian refugees touched down in Toronto just before midnight on Thursday and will be followed by a second military airlift to Montreal on Saturday. Trudeau has said 10,000 will be resettled by the end of the year and a further 15,000 by the end of February.

As Trudeau met the military aircraft amid tight security at a special terminal, privately sponsored Syrian refugees were arriving on commercial flights at Toronto's main terminal, greeted by sponsors and ordinary Canadians who had come to the airport to welcome the much-anticipated newcomers. "They are very tired, but they are happy and hopeful," said Soriya Dasir, a worker with Abraham Festival, a group that sponsored a single mother and three children who had been living in a camp in Jordan for two years, as she escorted them past waiting media. Toronto's airport authority urged Canadians not to come to the airport to greet the refugees or drop off donations, saying: "We're so proud that our community wants to help, but such a response would be very overwhelming for those arriving." The request did not deter Shai Reef, 20, who held up a sign that read: "Welcome to Canada" in Arabic. "I'm here to show my solidarity for and support of the Syrian people going through genocide in Syria," Reef said. "As Jews, we were also locked out, I know what it feels like."

All 10 of Canada's provincial premiers support taking in the refugees and members of the opposition, including the Conservative party, attended the welcoming late Thursday. Trudeau was also joined by the ministers of immigration, health and defense, as well as Ontario's premier and Toronto's mayor. The mayor tweeted a welcome, while the Toronto Star, the country's largest newspaper, covered its front page with a "Welcome to Canada" banner headline in English and Arabic, along with an article explaining Canadian weather, ice hockey and slang.

Greg Keoushkerian, 26, waited at the airport for his best friend, whom he sponsored. Keoushkerian, a Syrian refugee of Armenian descent, said he and his family have been in Canada for 10 months and didn't bother applying for asylum in the U.S. "Canada has been so welcoming. The U.S. doesn't seem like that. People here respect each other here. It's so multicultural," he said. "All my friends are asking about Canada now and how they can come here. In two weeks there will be another flight with some of my other friends."

The reception in Canada contrasted sharply with that of the neighboring United States, where fear of Syrian refugees following the deadly Nov. 13 Paris attacks spurred opposition to allowing them entry. Some U.S. governors said their states would not accept Syrian refugees. With security concerns, immigration paperwork and the flight's late-night arrival, refugees on the military aircraft were to be put up at a nearby hotel for the night before meeting their sponsors and resettlement agencies on Friday.

Canada has long prided itself on opening its doors to asylum-seekers. In times of crisis in decades past, Canada resettled refugees quickly and in large numbers. It airlifted more than 5,000 people from Kosovo in the late 1990s, more than 5,000 from Uganda in 1972 and resettled 60,000 Vietnamese in 1979-80. More than 1.2 million refugees have arrived in Canada since World War II.
RELATED TOPICS