Children afraid to say they are Muslims as they face backlash in schools, on streets and TV 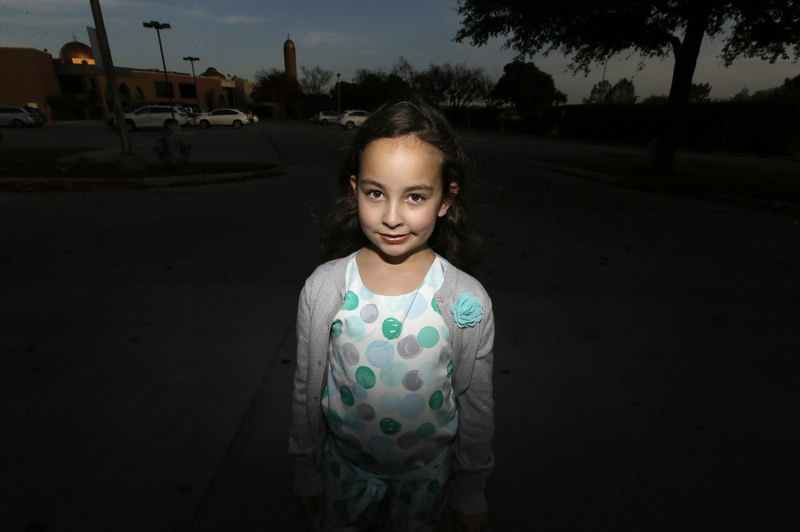 Sofia Yassini, 8, poses for a photo outsider a mosque in Richardson, Texas, Friday, Dec. 11, 2015. (AP Photo)
by Associated Press Dec 15, 2015 12:00 am
A backlash against American Muslims is leaving a mark on some of the nation's youngest minds.

After seeing presidential candidate Donald Trump call on television for barring Muslims from entering the country, 8-year-old Sofia Yassini checked the locks on her family's home in Plano, Texas, imagining the Army would take them away. She raced to her room and stuffed a pair of Barbie dolls, a tub of peanut butter and a toothbrush into a bag. She insisted on bringing boots for the long boat ride she imagined was coming.

When her mother, Melissa, arrived home from her work as a human resources manager, Sofia ran into her arms and cried.

"I want people to understand the impact that their words have on these children," said Melissa Yassini, who described the experience in a Facebook post that had been shared more than 21,000 times as of Monday.

She raced to her room and stuffed a pair of Barbie dolls, a tub of peanut butter and a toothbrush into a bag. She insisted on bringing boots for the long boat ride she imagined was coming. | Sofia Yassini's accounts after Trump's comments

"We often forget, we're waging war on one another with words, and we're adults. We can take it. The kids are suffering with this. They go to school every day and they're afraid to tell people they're Muslim. This has to stop."

Anti-Muslim sentiment was building in the days before 14 people were killed Dec. 2 in the massacre at a disability center in Southern California by a Muslim couple investigators say were inspired at least in part by Daesh. Some governors had already said they wouldn't allow Syrians fleeing civil war into their states because of extremist fears. Experts say Trump's call Dec. 7 to keep all Muslims from entering the United States — a plan he said would apply only temporarily and to non-citizens — only fanned the flames.

Parents say their children hear disparaging remarks in their own communities, see hateful bumper stickers and T-shirts, and have had friends abandon them because of their faith.

Ahad Khan, 12, came home from school in rural Westminster, Maryland, in tears because his best friend called him a future terrorist who couldn't be trusted, according to Ahad's father, Raza Khan.

Khan, the chairman of the science department at Carroll Community College, shared Ahad's experience in an open letter to Trump on Facebook. As of Monday, it had been shared more than 4,300 times.

"He is the engine right now for that fearmongering," Khan said in an interview. "I don't think he realizes that his words matter. He doesn't realize the damaging effect his words can have on people, especially kids."

In the minds of children — many long on imagination and short on political understanding — phrases like "total and complete shutdown of Muslims" can be traumatic, experts say.

"Children expect that society will be nurturing and protective," said Mark DeAntonio, a child psychiatry professor at the University of California Los Angeles. "Statements implying detainment or exclusion for arbitrary reason like race ethnicity or religion create anxiety and trauma."

Some children have questioned their faith and place in American society.

Kafumba Kromah, of Minneapolis, said his 8-year-old daughter asked him: "Why we are Muslims? Why can't we be what everybody else is?" His daughter encouraged him to cancel a trip to his native Liberia for fear he would be barred from returning.

Mehnaz Mahmood, of Dallas, said her 7-year-old son urged her to switch to a black-and-white hijab — so she would look more like a nun — after they were subjected to anti-Muslim remarks outside his school this week.

Sam Madi, of New Orleans, watched coverage of Trump's remarks with his 11-year-old son. He said he feared anti-Muslim sentiment would set back progress in integrating Muslims into American society. Zane Madi plays soccer and spends most weekends with his mother helping the city's homeless.

Parents needn't shoulder the burden themselves, said Patricia Greenfield, a psychology professor at UCLA. Teachers should talk about not generalizing Muslims and ask children to reinforce their friendships with Muslim students, she said in an email.

As Khan, the father in Maryland, tucked his son in last week, he left him with the words he recited when he became a U.S. citizen two decades ago: "One nation, under God, indivisible, with liberty and justice for all."

"I don't know why, I don't know how people forget that," Khan said later, fighting back tears. "We have to; otherwise we're dividing ourselves."
Last Update: Dec 15, 2015 6:16 pm
RELATED TOPICS