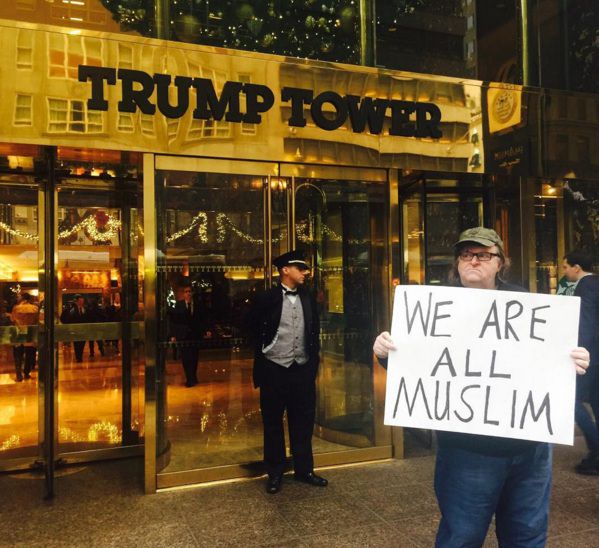 Famous for his political activism, Moore held a banner that wrote "We Are All Muslim" in front of the Trump Tower on Fifth Avenue in Manhattan, and shared his photo on social media platform, Instagram.

He later posted an open address to Trump on his Facebook page. "Today I stood in front of the Trump Tower and held a sign until police came. Then I went home and wrote Donald Trump a letter," Moore said.

Stating his accounts on how Trump asked him not to be disturbed in a show they both participated, Moore linked this memory to today and said that Trump is an "angry white guy" that has a "bogeyman" in mind. "And now, here we are in 2015 and, like many other angry white guys, you are frightened by a bogeyman who is out to get you. That bogeyman, in your mind, are all Muslims. Not just the ones who have killed, but ALL MUSLIMS," Moore said.

"Fortunately, Donald, you and your supporters no longer look like what America actually is today. We are not a country of angry white guys. Here's a statistic that is going to make your hair spin: 81 per cent of the electorate who will pick the president next year are either female, people of color, or young people between the ages of 18 and 35. In other words, not you. And not the people who want you leading their country," the letter stated.

61-year old director slammed Trump's remarks targeting Muslims in which he called for all Muslims to be barred from entering the U.S. "So, in desperation and insanity, you call for a ban on all Muslims entering this country. I was raised to believe that we are all each other's brother and sister, regardless of race, creed or color. That means if you want to ban Muslims, you are first going to have to ban me. And everyone else."

"We are all Muslim," Moore wrote, setting as the slogan of his campaign against Trump's discriminatory remarks.

"Just as we are all Mexican, we are all Catholic and Jewish and white and black and every shade in between. We are all children of God (or nature or whatever you believe in), part of the human family, and nothing you say or do can change that fact one iota."
Moore went on with slamming Trump, who tries to legitimize his stance through a security-based rhetoric of the U.S. and American values.

"If you don't like living by these American rules, then you need to go to the time-out room in any one of your Towers, sit there, and think about what you've said. And then leave the rest of us alone so we can elect a real president who is both compassionate and strong," he said.

Moore gained worldwide fame through his anti-capitalist and anti-imperialist stance reflected through his documentary work like "Bowling for Columbine," Oscar-winning documentary on guns and violence in the U.S., along with productions like "Fahrenheit 9/11" and "Sicko."
Last Update: Dec 17, 2015 3:45 pm
RELATED TOPICS