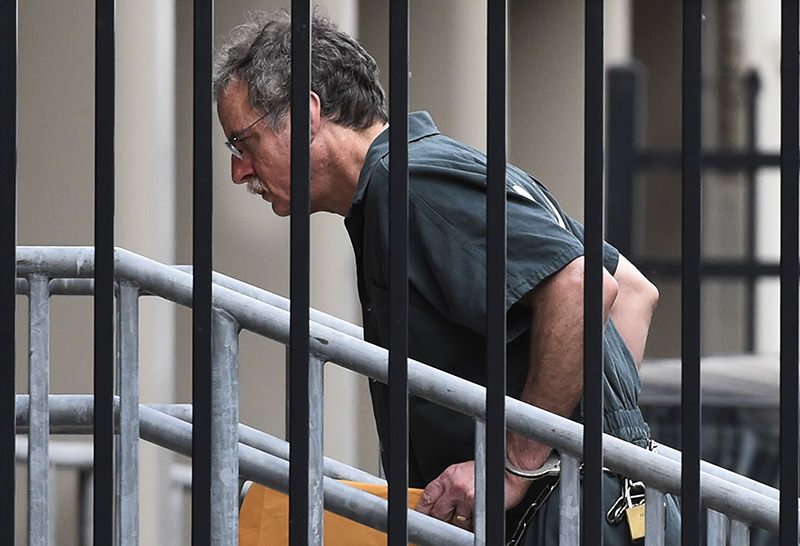 Eric Feight arrives for his sentencing at the James T. Foley Federal Courthouse, Wednesday, Dec. 16, 2015, in Albany, N.Y. (AP Photo)
by Compiled from Wire Services Dec 17, 2015 12:00 am
An upstate New York man who admitted his role in a plot to build a radiation-emitting "death ray" intended to harm Muslim targets and President Barack Obama, was sentenced to eight years in prison federal authorities said on Wednesday.

Eric Feight, 57, pleaded guilty in 2014 to providing material support to terrorists. He was sentenced Wednesday in federal court in Albany. He admitted helping Glendon Scott Crawford, a self-proclaimed Ku Klux Klansman, in modifying an industrial-grade radiation device, which tabloid newspapers dubbed a "death ray," and building a switch to operate it from a distance.

Feight, a control systems engineer, told U.S. District Judge Gary Sharpe that co-defendant Glendon Scott Crawford first approached him to help create a mobile X-ray to sterilize medical waste, only later telling him it could be used to target Muslim terrorist cells operating in the U.S.

"Potential targets were never discussed with me," Feight said. The married father of three said he became afraid to drop out after Crawford introduced him to two seemingly dangerous investors in the project, actually FBI undercover agents.

He procrastinated for six months in delivering the remote control while refusing to integrate it to directly operate the actual X-ray machine the agents brought, adding he didn't think it would work, he said.

"You understood what it was you were doing," Sharpe said. The machine could have worked and killed people as intended, he said.

"It's bizarre somebody with your background, your intelligence and your experience would be listening to Crawford's nonsense," Sharpe said.

Feight's sentence was shorter than the 15 years prosecutors requested.

Crawford, 51, an industrial mechanic at General Electric in Schenectady, where Feight was a subcontractor, was convicted of attempting to produce a deadly radiological device, conspiring to use a weapon of mass destruction and distributing information about weapons of mass destruction. He could face 25 years in prison at his sentencing in March.

Investigators taped Crawford, a Navy veteran and also a family man with no criminal history, calling Islam "an opportunist infection of DNA" and approaching a Ku Klux Klan grand wizard who was an FBI informant for support with the X-ray.

Feight and Crawford were arrested in 2013 and have been jailed since.

Investigators began tracking Crawford in 2012 after he approached two Albany-area Jewish groups. Authorities said the device was inoperable. Nobody was hurt.

The sentencing comes amid a rash of suspected hate crimes and threats against Muslim targets that has followed a deadly attack at a holiday party in California by a married couple who authorities say were inspired by Daesh terrorists.

The white supremacist KKK is described by the Southern Poverty Law Center as a hate group.