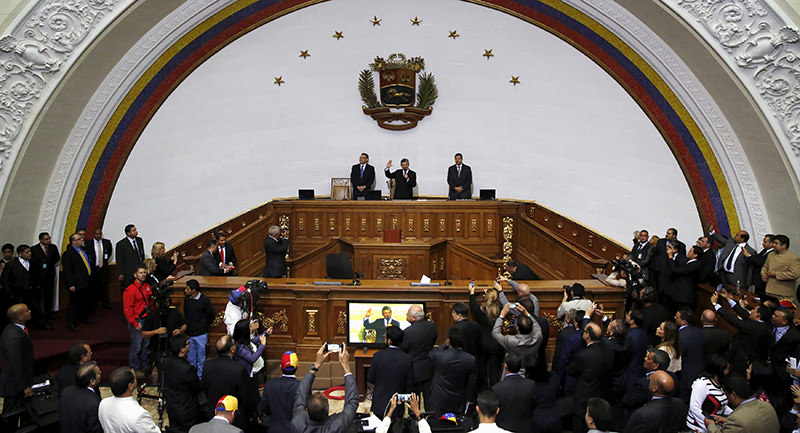 Lawmakers were sworn in during a heated parliamentary session that saw pro-government representatives walk out in protest after pushing and shoving their way onto the dais as the new leadership laid out its legislative agenda.

It's the first time in 17 years that the opposition to the socialist revolution begun by the late President Hugo Chavez have controlled the legislature, and many of its leaders seemed rapt in disbelief.

But the two-thirds opposition majority won by a landslide last month, giving it unprecedented strength to challenge Maduro's rule, was in doubt after a government-stacked Supreme Court barred four lawmakers from taking their seats at the last minute while it probes allegations of electoral fraud. As a result only 163 of 167 lawmakers were sworn in during Tuesday's ceremony.

Earlier in the day, hundreds of opposition supporters accompanied the incoming lawmakers past a heavy military barricade to the neoclassical legislature downtown. A few blocks away, a much larger crowd of government supporters gathered outside the presidential palace to lament the inauguration of what they called the "bourgeois parliament."

Reflecting the changing political winds, journalists were granted access to the legislature for the first time in years and state TV broadcast interviews with opposition leaders. Conspicuously absent inside the domed building were the oversize portraits of Chavez and independence hero Simon Bolivar that had been a fixture for years.

Instead, from the public gallery, the wife of jailed opposition leader Leopoldo Lopez held up a sign reading "Amnesty Now," referring to what's likely to be the legislature's first order of business: a law freeing dozens of activists jailed during anti-government protests in 2014 that resulted in dozens of deaths.

"Keep a strong hand!" 65-year-old Mary Mujica shouted as the incoming parliamentary president, Henry Ramos, muscled his way through the crowd. "There's a criminal conspiracy running the country and you can't negotiate with criminals."

Opposition lawmakers promise sweeping changes, while the socialists have been equally adamant that the legislature not erode social gains of Chavez's revolution.

The 72-year-old Ramos, a sharp-tongued, pre-Chavez-era politician who fought off moderates in the opposition coalition to take the president's gavel, said in his inaugural remarks that a six-month deadline to remove Maduro by constitutional means is not negotiable, echoing demands made by hard-liners during the 2014 protests.

Moderates have criticized that strategy and instead advocate pragmatic steps to wrench the oil-dependent economy out of a tailspin marked by triple-digit inflation and the world's deepest recession.

What unites the two factions is an agenda of probing government corruption and freeing opposition figures that they and many human rights groups consider political prisoners. It's a polarizing issue that also promises to rally government supporters.

"It's completely illogical," outgoing National Assembly president Diosdado Cabello said of the proposed amnesty law. "It's like the assassins pardoning themselves."

Jennifer McCoy, a longtime observer of Venezuela elections for a pro-democracy group founded by former U.S. President Jimmy Carter, said the coming weeks will tell whether the government and opposition can put aside their mutual hatred.

"This is the moment when both sides need to determine how to move forward: whether they are going to work together or engage in a battle royal," said McCoy, who is now director of the Global Studies Institute at Georgia State University.

The socialists began fighting the new congress almost as soon as it was voted in. Outgoing lawmakers appointed new members to the Supreme Court, which they hope will counter opposition legislation.

Maduro also issued a flurry of decrees Monday including one circumventing congress' power to approve the appointment of central bank board members. Ramos has vowed to review the executive orders.

In Washington, the U.S. State Department congratulated Venezuela on the inauguration of a new assembly but said it remains "concerned" by controversy surrounding the delegates who have not been seated.

Wielding the gavel for the first time and appearing to relish his power to cut off rivals' soliloquies, Ramos sent a message to Maduro that the days of rubber-stamping executive decrees are over.

"Nobody should think that's the way to solve the country's problems," he said.