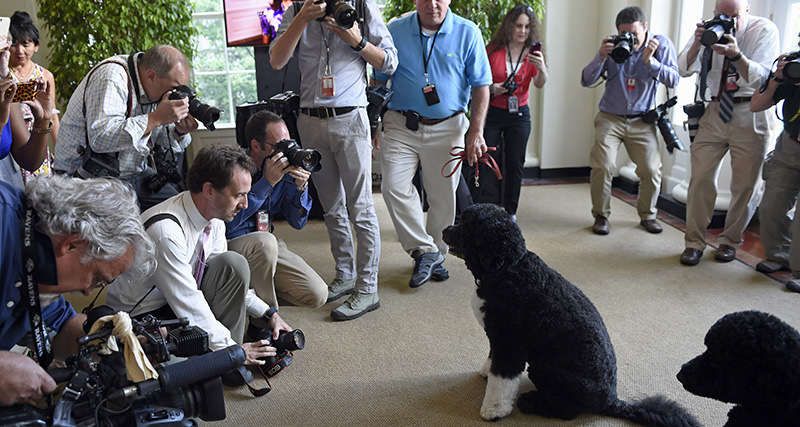 Journalists take photos of first dog Bo while at the White House in Washington (AP Photo)
by Associated Press Jan 09, 2016 12:00 am
Officials in Washington say they've arrested a North Dakota man who allegedly traveled to the nation's capital to kidnap a dog belonging to President Barack Obama.

D.C. Superior Court documents say Secret Service agents interviewed Scott D. Stockert of Dickinson, North Dakota, at a Washington hotel after receiving information that he was on his way to the capital to kidnap a "pet" owned by the first family.

The first family has two Portuguese water dogs, Bo and Sunny. Officials arrested Stockert after finding weapons in his car.

A court document says that Secret Service agents interviewed Stockert on Wednesday after they received information from a Secret Service office in Minnesota that Stockert "was on his way to Washington, D.C., to kidnap the pet that belongs to the first family."

During the interview, agents asked Stockert whether he had access to any weapons, and Stockert acknowledged having two guns in his truck.
Agents searched the truck and found a shotgun and rifle as well as a machete, a billy club and ammunition.

The court document says Stockert was not a registered gun owner and that he was charged with violating District of Columbia laws on carrying a rifle or shotgun outside a home or business.

According to court documents, Stockert told agents that he was "Jesus Christ" and that his parents were President John F. Kennedy and actress Marilyn Monroe and that he came to Washington to announce he was running for president.

His attorney, Michael Madden, did not immediately return an emailed request for comment late Friday. His telephone voicemail was not accepting new messages.

The first family's search for a dog to join them at the White House was widely publicized. On election night in 2008, then President-elect Obama said that his daughters, Sasha and Malia, had "earned the new puppy that's coming with us to the White House."

The dogs have been a regular presence at White House events. Late last year, they accompanied first lady Michelle Obama to receive the White House Christmas Tree and to welcome children to the White House during a preview of the home's holiday decorations.