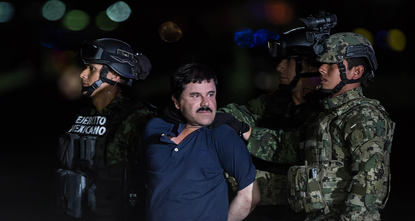 The Mexican attorney general's office said the proceedings are based on two extradition requests made by US authorities last year, but it did not indicate when they would start.

The Mexican government received a formal extradition request from the United States in June, two weeks after Guzman's escape from prison. Guzman faces drug trafficking charges in a clutch of US states.

Following his escape from a maximum-security prison in July, the Mexican attorney general's office secured an arrest warrant for his extradition.
His lawyers filed for an injunction to block the warrant but it was eventually rejected.

One of Guzman's attorneys, Juan Pablo Badillo, promised a legal battle that could reach the Supreme Court.

"A legal battle has begun in the constitutional framework that will be very serious, very tough," Badillo told reporters outside the Altiplano prison near Mexico City, where Guzman was sent following his arrest on Friday.

The lawyer said Guzman's legal team has filed several injunctions against extradition, although he did not say whether courts had ruled on them.

"He shouldn't be extradited because Mexico has a fair Constitution," he said.

US politicians called for Guzman's extradition following his arrest over concerns that the wealthy drug lord could pay his way out of prison again.
Last Update: Jan 10, 2016 12:03 am
RELATED TOPICS