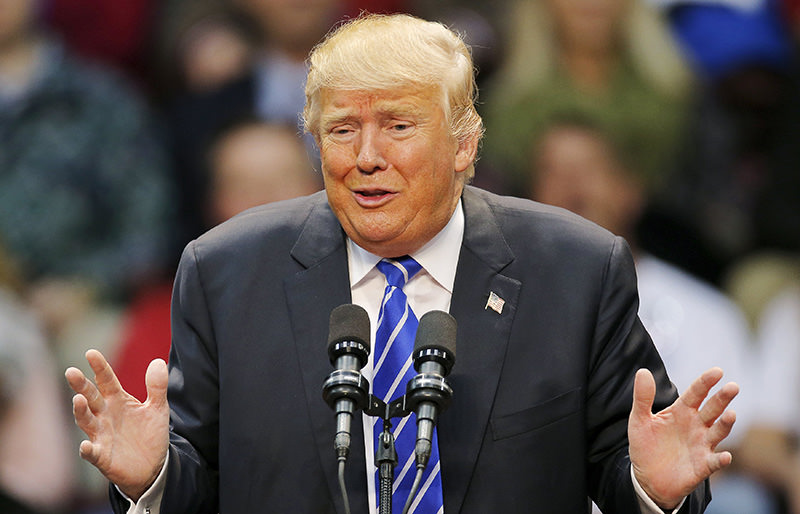 Republican presidential candidate Donald Trump speaks during a campaign event in Rock Hill, South Carolina January 8, 2016 (Reuters Photo)
by reuters Jan 09, 2016 12:00 am
A Muslim advocacy group on Saturday called on Republican U.S. presidential candidate Donald Trump to apologize after a Muslim woman engaged in a silent protest was removed by security personnel and booed by the crowd at his rally in South Carolina on Friday night.

"The image of a Muslim woman being abused and ejected from a political rally sends a chilling message to American Muslims and to all those who value our nation's traditions of religious diversity and civic participation," said Nihad Awad, executive director of the Council on American-Islamic Relations (CAIR).

"We don't need to be shouting and booing and scaring somebody who decided to stand up and have some sort of silent protest," Kasich told reporters on the sidelines of a poverty summit in South Carolina on Saturday.

"What the heck is that about? We're not in high school. I mean, this is not some god-darn high school basketball game where we're booing the other team."

CNN reported that Rose Hamid, a 56-year-old flight attendant, stood up in the stands directly behind Trump when he suggested that Syrian refugees fleeing violence in their homeland were affiliated with Daesh militants.

Hamid was wearing a white head scarf and a blue T-shirt emblazoned with the words, "Salam, I come in peace."

"Donald Trump should issue a public apology to the Muslim woman kicked out of his rally and make a clear statement that American Muslims are welcome as fellow citizens and as participants in the nation's political process," Awad said.

The incident was the latest controversy involving Trump regarding Muslims. Trump last month advocated banning all foreign Muslims from entering the United States "until our country's representatives can figure out what is going on." In November, he said he saw thousands of Muslims in Jersey City, New Jersey, cheering the Sept. 11, 2001, attacks on New York's World Trade Center. Fact-checkers have debunked this assertion.

At a rally on Saturday in Ottumwa, Iowa, Trump cited last month's San Bernardino, California massacre and the shooting of a Philadelphia police officer on Friday by a man who police said pledged allegiance to Daesh as examples of Muslim anger toward Americans.

"The hatred is so incredible," Trump said. "And the danger, when we have people willing to fly airplanes into the World Trade Center and many other things, we've got to solve it."
Last Update: Jan 09, 2016 11:34 pm
RELATED TOPICS