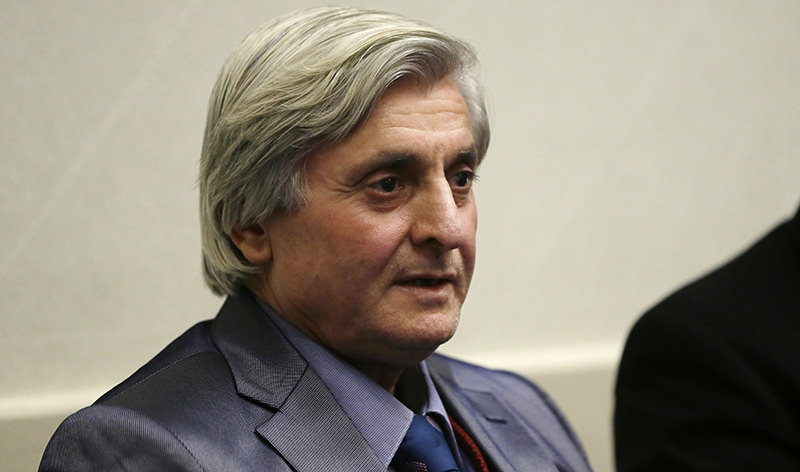 In this Thursday, Dec. 17, 2015, file photo, Syrian refugee Refaai Hamo addresses the media during a news conference, in Romulus, Mich. (AP Photo)
by Associated Press Jan 11, 2016 12:00 am
A Syrian scientist stricken with cancer and seeking a new start for his family in the United States will represent Syrian refugees as a guest of first lady Michelle Obama for the president's final State of the Union address.

President Barack Obama has committed to accepting an additional 10,000 Syrian refugees, but some Republican lawmakers and presidential candidates are critical of the expansion. Republican presidential candidate Texas Sen. Ted Cruz, for example, noted the recent arrest of two Iraqi refugees on charges of trying to help the Daesh group. During an interview with CNN that aired Sunday, Cruz emphasized that they came to the United States "using the same vetting that President Obama wants us to trust with Syrian refugees."

Refaai Hamo, his son and three daughters landed at Detroit Metropolitan Airport in December, anxious to rebuild their lives. Hamo fled to Turkey from Syria after a missile attack killed his wife and one other daughter. Hamo was profiled on the popular photo blog Humans of New York and identified as "The Scientist."

The White House said Sunday that Hamo will be among about 20 guests who will sit near the first lady on Tuesday. The guests include several veterans and service members, including one of the three Americans who thwarted a terrorist attack aboard a Paris-bound train.

Those on the guest list will highlight issues that Obama has attempted to prioritize during his tenure, such as expanded health insurance coverage, and issues that he hopes to work on during his final year, such as criminal justice reform. The guest list includes a California man whose partner was killed in the San Bernardino attack, the first female Army Reserve officer to graduate from the Army's elite Ranger School and a plaintiff in the landmark Supreme Court case that found same-sex couples have a constitutional right to marry. One seat will be empty, to represent the victims of gun violence.

Obama read about Hamo's story last month. His cancer had gone untreated because he lacked health insurance. The actor, Ed Norton, set up for the Hamo family an online fundraising campaign that raised more than $450,000. The White House described Hamo as living the kind of life in Syria that is associated with the American dream. He married his college sweetheart, and they built a life together before a missile tore through the complex he helped design and where his family lived.

Obama told Hamo through a Facebook posting that, "Yes, you can still make a difference in the world, and we're proud that you'll pursue your dreams here. Welcome to your new home. You're part of what makes America great."

Staff Sgt. Spencer Stone of Sacramento, California, who, along with Anthony Sadler and U.S. Army Specialist Alex Skarlatos, stopped a man from opening fire on passengers aboard a crowded Paris-bound train.

Oscar Vazquez of Fort Worth, Texas, a veteran who came to the U.S. as a child from Mexico, and now works as a business analyst and advocate for Latino students.
Last Update: Jan 11, 2016 1:56 pm
RELATED TOPICS