Video: US sailor apologizing to Iran in video amid denial by officials 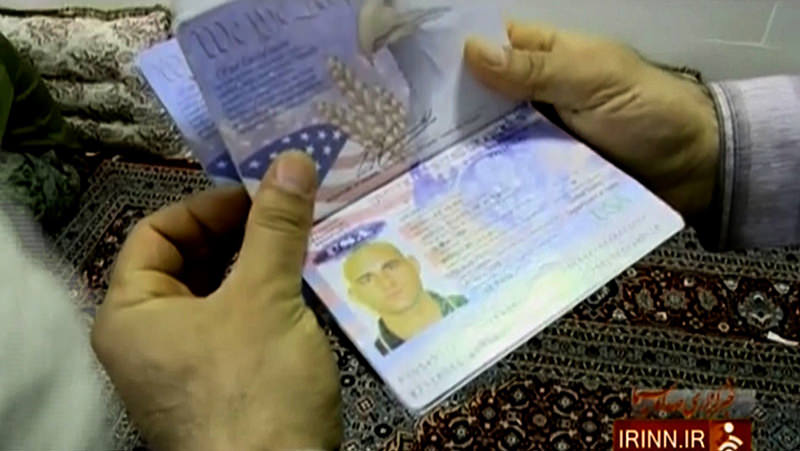 A handout image grab taken from a video released on January 13, 2016, by the Islamic Republic of Iran's News Network (IRINN), shows the passport of a US Navy sailor in the Farsi Island (AFP Photo)
by Compiled from Wire Services Jan 13, 2016 12:00 am

Iranian state TV on Wednesday has rerun a video clip of one of the held U.S. sailors apologizing for the intrusion into Iranian territorial waters.

In the footage, filmed before the sailors were released on Wednesday, the sailor says: "It was a mistake. That was our fault and we apologize for our mistake."

The sailor is not identified by name in the clip but the TV interviewer says he is the "commander" of the group seized by the Iranians. He is then asked if the sailors' GPS had alerted them about the intrusion, to which he replies, "I believe so."

The U.S. Central Command later said the "video appears to be authentic but we cannot speak to the conditions of the situation or what the crew was experiencing at the time."

It added that the crew is "currently undergoing the reintegration process and we will continue to investigate this incident. What matters most right now, however, is that our sailors are back safely."

Iran freed ten U.S. sailors on Wednesday a day after detaining them aboard two U.S. Navy patrol boats in the Gulf, bringing a swift end to an incident that had rattled nerves shortly before the expected implementation of a landmark nuclear accord.

Iran's Islamic Revolutionary Guard Corps (IRGC) said it had released the sailors after determining they had entered Iranian territorial waters by mistake. IRGC Rear Admiral Ali Fadavi said earlier the boats had strayed due to a broken navigation system.

The quick resolution contrasted with previous cases in which British servicemen were held by Iran for considerably longer, in once case almost two weeks.

Iran expects the U.N. nuclear watchdog to confirm on Friday it has curtailed its nuclear programme, paving the way for the unfreezing of billions of dollars of Iranian assets and an end to bans that have crippled oil exports.