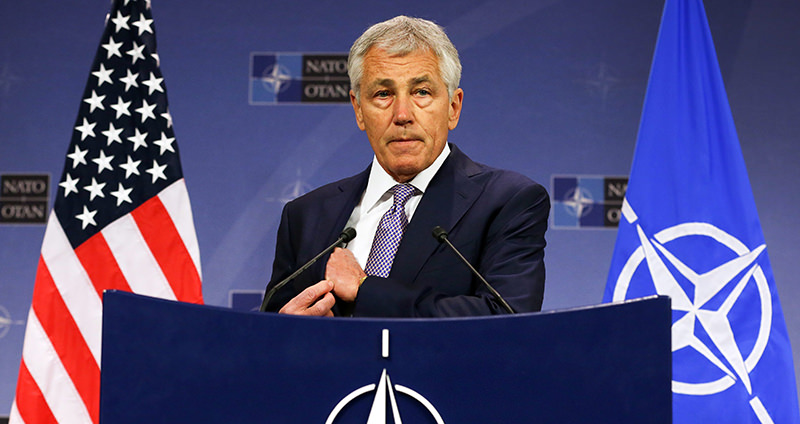 A file picture dated 05 June 2013 shows US Secretary of Defense Chuck Hagel holding a press conference after a meeting of Ministers of Defense, at the NATO headquarters in Brussels (EPA Photo)
by Anadolu Agency Jan 14, 2016 12:00 am
President Barack Obama's failure to follow through on his declaration of "red lines" in Syria hurt the credibility of the White House, a former U.S. defense chief said Wednesday.

"I think it did hurt the credibility of the president of the U.S. to make those kinds of pronouncements and then not follow through," said Chuck Hagel at a panel hosted by the Atlantic Council think thank.

After serving two years in the Obama administration, Hagel stepped down in 2014, leading many to believe he was forced out because of differences with Obama's inner circle.

The Syrian crisis was one of many disagreements Hagel had with the White House.

He advocated intervention in Syria for humanitarian reasons after the regime of Bashar al-Assad used chemical weapons on civilians of a Damascus suburb in 2013.

Obama and Hagel were in sync following the deadly chemical attack that killed 1,500 victims, with the president saying the use of chemical weapons was a "red line" for the U.S. and that Washington would take action if UN experts found evidence of such use. But Obama failed to take military action.

Hagel told the audience that when the U.S. president says something, there must be a follow through.

The veteran top defense official also said that U.S. policy in Syria was paralyzed by the statement, "Assad must go."

In a recent interview, Hagel slammed the White House National Security team for keeping too many people in the president's inner circle and for holding long meetings that went nowhere.

He reiterated his "frustration" and said the White House has a tendency of dominating all other department of the administration, which "cuts into the fabric of governing" because it impedes the ability of department heads and administration agencies to deliberate.

Micro-management and re-cycling too many people within the administration, caused "chaos", he said.

While voicing his frustrations, Hagel credited his former boss with preventing the U.S. from being dragged into crises by jumping into regional wars, particularly in Ukraine.

He said the U.S. would not wage war against Russia over Crimea that was annexed by Russia in 2013.

He said he conveyed to his Russian counterpart that the U.S. would not hesitate to take action if Russia tried to invade any NATO member country in Eastern Europe.

Responding to a question about his advice to Republican presidential front-runner Donald Trump being on the hot seat for anti-Muslim remarks, Hagel urged all other candidates, on both sides, to focus on unifying the U.S. rather than dividing.

"I have been struck in this presidential campaign, by the focus -- not all the candidates but most of them, especially the ones who are leading -- unfortunately candidacies have been focused on dividing America," he said. "That is dangerous. That is not who we are."