Zika virus may infect up to 700,000 people in Colombia 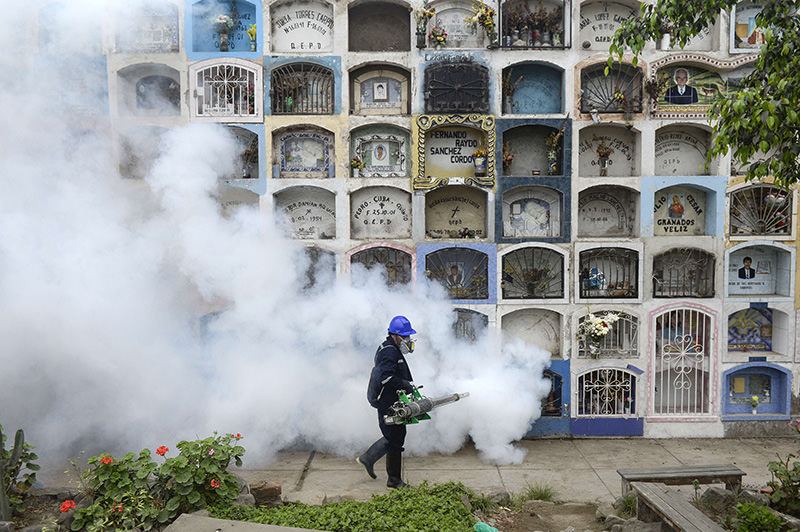 by Compiled from Wire Services Jan 20, 2016 12:00 am
The mosquito-borne Zika virus has already infected more than 13,500 people in Colombia and could hit as many as 700,000, the health minister said on Wednesday.

According to Pan-American Health Organization figures, the country is second only to Brazil in infection rates, health minister Alejandro Gaviria told journalists.

"We expect an expansion similar to what we had with the chikungunya virus last year, to finish with between 600,000 to 700,000 cases," Gaviria said.

Some 560 pregnant women are among those infected, the minister said, though so far no cases of newborns suffering from microcephaly, a congenital defect caused by Zika, have been registered in the country.

The government is advising Colombian women to delay becoming pregnant for six to eight months in a bid to avoid potential infection.

The Atlanta-based U.S. Center for Disease Control and Prevention last week warned pregnant women to avoid travel to 14 countries, including Colombia, and territories in the Caribbean and Latin America affected by the virus.

It's especially hard for Brazil, where there's been a wave of birth defects that officials there believe is related to Zika at the same time it has been battling its deepest recession in three decades.

Brazilian health officials said Wednesday that the number of cases of microcephaly, a rare brain defect in babies, has risen to 3,893, since authorities began investigating the surge in cases, in October. Fewer than 150 such cases were seen in all of 2014 before Zika began to spread across the country.

The outbreak comes as about 1 million people, a third of them foreigners, are expected to flood Rio de Janeiro in the coming month to celebrate Carnival. And hoteliers and others have invested billions of dollars in anticipation of a flood of visitors to the Summer Olympics in Rio in August.

"The Zika virus being in the news could potentially keep away people even those who aren't pregnant or have no risk of becoming pregnant," said Otto Nogami, an economist at the Insper business school in Sao Paulo.

Sagging demand from China has undercut Latin America's export-dependent economies at the same time their currencies have been battered by the rising values of dollars and euros. Plunging international prices have hurt many of their mining and oil companies that had been darling of investors the past decade, but cheaper currencies make their resorts a better bargain for visitors.

"We're one of the few sectors that isn't crying over the dollar's surge," said Sandra Howard Taylor, vice minister of tourism in Colombia, as she was heading to Spain to promote the country at an international tourism fair. Last year, Colombia saw a 9 percent jump in foreign tourists through October.

"We're trying to take the maximum advantage of the situation because we don't know for sure how long it will last," Howard said.

In the Colombian port city of Barranquilla, home to Latin America's largest Carnival outside Brazil, health authorities have been educating residents how to identify symptoms and urging women to put off pregnancies for at least six months until the worst of the epidemic passes. In total, there are more than 13,500 confirmed or suspected cases of the virus in Colombia.

Wendy Ferrer, whose daughter was born two weeks ago, said she considers herself lucky because her poor neighborhood near Barranquilla has been one of the hardest hit by the virus. "Doctors told me to be extra careful during my pregnancy but thank God everything turned out fine," said Ferrer, waiting at a public hospital for a pediatric checkup.

He said a cost-of-illness study on mosquito-borne viruses following an outbreak in 2005 and 2006 of chikungunya in La Reunion, a French overseas department in the Indian Ocean, found substantially higher medical costs and a toll on companies that experienced higher absenteeism due to sick workers.

Dengue and chikungunya two other fever-producing viruses spread by the same mosquito responsible for Zika infected more than 3 million people in the region last year, according to the Pan American Health Organization.

Countries across the Western Hemisphere have been stepping fight against mosquitoes in recent years.

Scientists in Brazil, Panama and the Cayman Islands have been experimenting with the release of genetically modified sterile mosquitoes to disrupt breeding. Fogging machines have become a common sight in many Latin American cities.

But the most effective way to combat the disease remains vigilance. Brazilian Health Minister Marcelo Castro says he's on the lookout for potential breeding spots places where water collects when he heads out for his morning walk.

"My radar is always on. If I see a glass, a bottle or anything in the street I throw it in the trash," Castro said. "All of us need to act the same way, because if the mosquito comes to breed it's a terror."
Last Update: Jan 20, 2016 9:54 pm
RELATED TOPICS