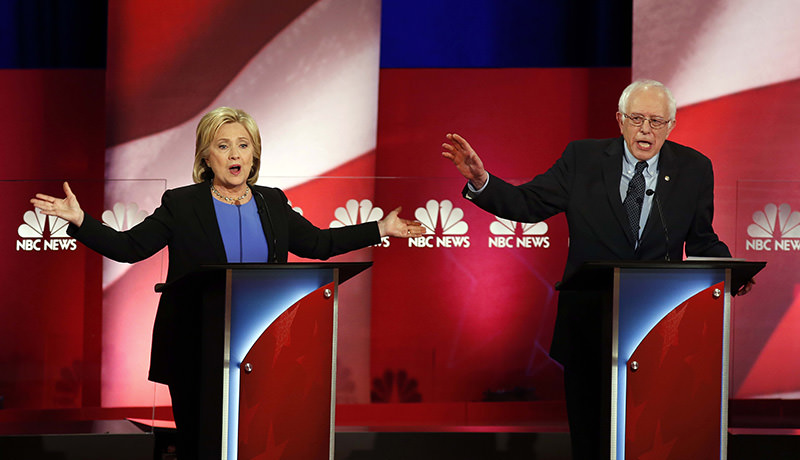 by Associated Press Jan 25, 2016 12:00 am
U.S. President Barack Obama is casting the Democratic primary to replace him as a contest between Hillary Clinton's pragmatism and experience versus Bernie Sanders' idealism and liberalism.

Obama, in his most extensive assessment to date of the 2016 Democratic primary, said Clinton is "wicked smart," but that her strengths are also her weaknesses. Praising her extensive preparation for the Oval Office, Obama said Clinton's experience had taught her to "campaign more in prose than poetry."

"I think Hillary came in with both privilege and burden of being perceived as the front-runner," Obama said in an interview with Politico posted on its website Monday. "And as a consequence, you know, where they stood at the beginning probably helps to explain why the language sometimes is different."

Asked repeatedly about the 2016 race, the president was extremely cautious to avoid showing explicit favor in the Democratic race. White House officials have said Obama will not endorse in the primary, which pits his 2008 primary opponent and former secretary of state against a liberal independent senator from Vermont who many Democrats feel embodies the upstart, idealistic nature of Obama's own campaign.

Obama said there was no doubt Sanders had tapped into a "running thread" in Democratic politics that questions why people should be scared to talk bluntly about inequality and "be full-throated in our progressivism."

"You know, that has an appeal," Obama said. "And I understand that."

Turning to the Republican primary, Obama said businessman Donald Trump and Sen. Ted Cruz exploit an anger and frustration that is real within the Republican Party. But he said his hope was that when voting began, Republicans "will settle down and say, 'Who do we want actually sitting behind the desk, making decisions that are critical to our future?'"

One week from now, Iowa voters will kick off the 2016 presidential contest with its caucuses. In the interview, Obama reflected on his own victory in Iowa eight years ago as the most satisfying of his political career, praising the process as a true expression of the way American democracy is supposed to work.

And he acknowledged his own weaknesses as an untested national candidate in 2008 in the high-stakes campaign in Iowa.

"I was too wonkish. I wasn't crisp in my presentation, and that was true for a while," Obama said. He said in his own primary campaign against Clinton, his supporters and staff "got too huffy" about legitimate questions that Clinton and her campaign had raised.

"There were times where I think the media probably was a little unfair to her and tilted a little my way in calling her out when she was tough, and not calling some of our folks out as much when we were tough in ads," Obama said.
Last Update: Jan 25, 2016 3:01 pm
RELATED TOPICS