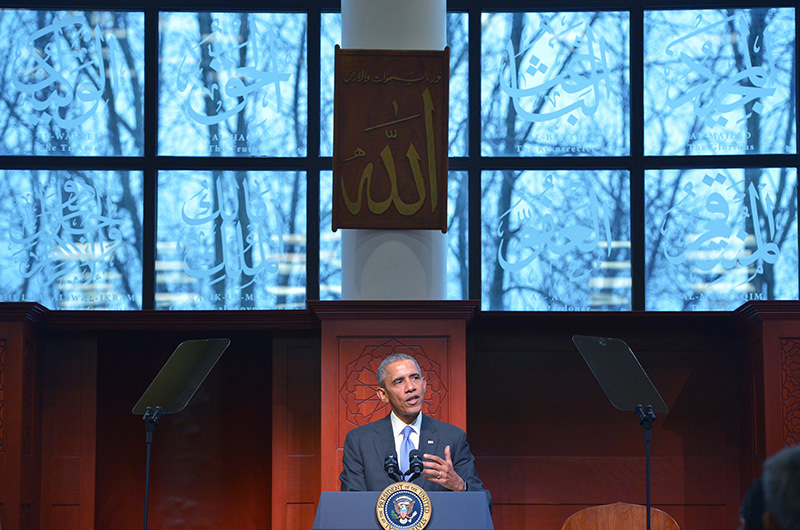 US President Barack Obama speaks at the Islamic Society of Baltimore, in Windsor Mill, Maryland on February 3, 2016 (AFP Photo)
by Mehmet Çelik Feb 03, 2016 12:00 am
During his first visit to a mosque as president of the United States, Barack Obama said on Wednesday that anti-Muslim political rhetoric is "inexcusable," and that an attack on one faith is an attack on all faiths.

"Recently, we've heard inexcusable political rhetoric used against Muslim-Americans that has no place in our country," the president said during his speech at the Islamic Society of Baltimore, a 47-year-old mosque in Maryland.

The president denounced rhetoric associating Islam with terrorism, saying: "For thousands of years, people around the world have been drawn to Islam's peace message."

Stressing that Muslims have been a part of the U.S. since colonial times and praising their contributions to society, Obama said: "Muslim-Americans keep us safe. They are our police. They are our firefighters. They are in Homeland Security." Obama has previously visited mosques in other countries but this was his first visit to a mosque in the U.S.

American Muslims have grown concerned over the anti-Muslim political rhetoric and groups with Islamophobic tendencies that have escalated in recent years. Republican presidential candidate Donald Trump has promoted such rhetoric during his election campaign, during which he has even called for the banning of all Muslims from the U.S.

There has been a recent rise in the number of attacks on mosques and individuals of the Islamic faith. "We've seen children bullied, we've seen mosques vandalized," Obama said, adding this is not what the U.S. stands for. The president also spoke about a young Muslim girl who told him that she is afraid. Obama underlined that the young girl reminds him of his own daughters, and that no one in American society should feel afraid due to their identity. "We're one American family," the president asserted.

The president added that, although there are extremist groups that are distorting the message of Islam, an entire religious group cannot be blamed "for the violent acts of the very few."