J. Bush blows up Twitter with photo of gun made by company that formerly supplied arms to Nazis 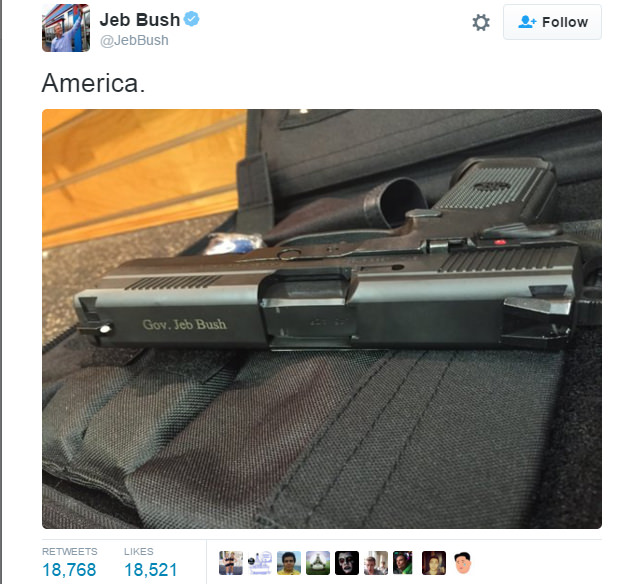 by Daily Sabah with Agencies Feb 17, 2016 12:00 am
Republican presidential candidate Jeb Bush on Tuesday shared a photo on Twitter which went viral for a few hours, displaying a picture of a handgun under the one-word caption "America."

His tweet prompted a flood of praise, outrage and dripping sarcasm.

The former Florida governor, who didn't immediately explain the photo of the pistol inscribed with his name, posted it after visiting the weapons maker FN Manufacturing in Columbia, South Carolina.

The FN is a subsidiary of FN Herstal, a foreign corporation based in Belgium, a company which was known as Fabrique Nationale d'Armes de Guerre for many years, Washington Post reported.

The company was requisitioned by the Nazi military and its factories produced thousands of weapons for Axis troops during the World War II, including pistols carried by Nazi officers and pilots. A model manufactured by the company was also used by Ally and Axis troops, the report adds.

Meanwhile today, FN Herstal also supplies weaponry to the U.S. military, including the popular M4 carbine as well as the M240 machine gun and the MK19 automatic grenade launcher, according to the Washington Post.

Candidates for the Republican presidential nomination are campaigning in the state ahead of its primary on Saturday.
Bush is polling fourth with around 10 percent of the vote.

His tweet received more than 7,000 likes and 9,000 retweets within an hour and a half of its posting, a record for his account, whose posts rarely rack up more than a hundred retweets.

The meme instantly took off, with others posting different photos under the heading "America," including the wrestler Hulk Hogan playing a guitar, Green Bay Packers quarterback Aaron Rodgers pretending to smoke marijuana and former President Ronald Reagan riding a dinosaur.

Others called attention to what President Barack Obama has called an "epidemic" of gun violence.

The U.S. saw 372 mass shootings in 2015, killing nearly 500 people and wounding nearly 2000, according to the Mass Shooting Tracker, which tracks gun related incidents.

Several tweets with the caption "America" included photos of the 26 victims of the Sandy Hook School massacre in 2012.

Republican lawmakers, many of whom are backed by the powerful lobby group the National Rifle Association, blocked Obama's attempt to pass gun control legislation after the incident.
Last Update: Feb 17, 2016 11:59 am
RELATED TOPICS