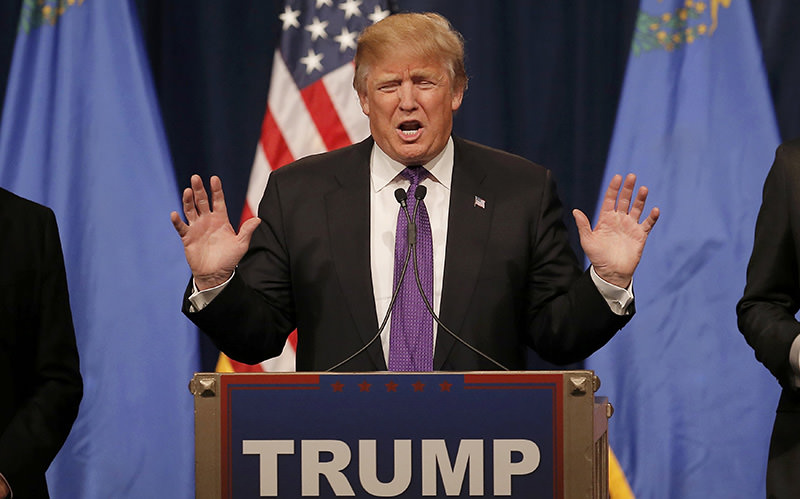 Republican U.S. presidential candidate Donald Trump addresses supporters after being declared by the television networks as the winner of the Nevada Repulican caucuses (Reuters Photo)
by Feb 24, 2016 12:00 am
Donald Trump won Tuesday's Republican caucuses in Nevada by a wide margin, US networks projected, giving the billionaire businessman his third straight victory in the race for the White House.

Early projections gave Trump 42 percent of the vote, with senators Marco Rubio of Florida and Ted Cruz of Texas trailing.

"Thank you Nevada, We will make America safe and great again," Trump tweeted.

Turnout was high, exceeding all expectations, with some caucus sites running low on ballots.

The results underscored the enormous challenge Trump's rivals face as the candidates head into next week's all important "Super Tuesday" contests involving 11 states.

The real estate mogul had been all but certain to triumph in Nevada, with the big question being which candidate would come in second.

The contest was the fourth for the Republican presidential candidates, with Trump so far winning in New Hampshire and South Carolina. He came in second in Iowa.

Although the caucus in Nevada is not expected to have a significant impact on the overall race -- only 30 delegates or slightly more than one percent of the total are up for grabs -- it was the first contest for the Republicans in the US West.

It is also the first test of Republican voter sentiment after Jeb Bush pulled out of the race last week following a poor showing in South Carolina.

And candidates here faced the most diverse electorate thus far in the race, more representative of the US population as a whole.
Last Update: Feb 24, 2016 3:48 pm
RELATED TOPICS