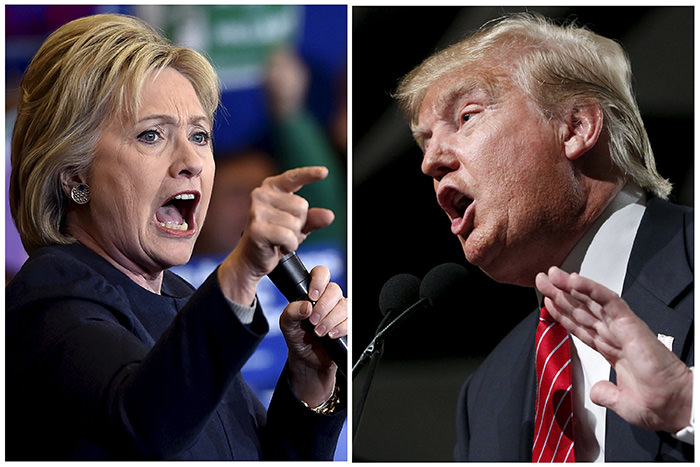 Super Tuesday primary results and polls suggest Hillary Clinton and Donald Trump are likely to compete for the White House. Meanwhile, both Democrats and Republicans have slammed Trump and urged voters to keep him from getting the nomination

To date, Trump has won voting in 10 of 15 states and received 319 delegates while his closest rival Texas Sen. Ted Cruz has won four states taking 226 delegates. Florida Sen. Marco Rubio has won just one state and has 110 delegates. To secure the Republican nomination, a candidate needs the support of 1,237 delegates.

The gap between the Democratic candidates is even wider. Clinton has also won 10 of the 15 states and 1,052 delegates while rival Vermont Sen. Bernie Sanders has secured five states and 427 delegates. A total of 2,383 of 3,286 delegates are needed to secure the Democratic nomination for president.

If the remaining primaries follow current trends, the U.S. will elect either its first-ever female president or a businessman and reality show character coming out of the Republican political establishment will assume the Oval Office. At the time Clinton announced her candidacy she knew she had to overcome perceptions about her negligence relating to the attack on the U.S. consulate in Benghazi, Libya, in 2012.

A significant factor giving momentum to Clinton's campaign has been the support of the black community.

According to an ABC news analysis of all primary exit polls, 83 percent of blacks voted for Clinton. In mostly black populated states such as South Carolina, Virginia, Georgia, Arkansas and Tennessee, more than 80 percent of black voters support Clinton.

Clinton's popularity among blacks dates to her husband's presidential bid. President Bill Clinton is credited with reducing unemployment among blacks and helping the community to benefit from the 1990s economic boom. Some have gone as far as to refer to Clinton as "the first black president." From time to time, she has emphasized "systemic racism" and "racial inequality" in the U.S.

Now all eyes are on the upcoming primaries in Florida and Ohio - two swing states - but polls predict Clinton well ahead of Sanders.

While on the Democratic front the picture is clearer than the Republican one, there is deep concern about Trump within the GOP establishment and an intensive deliberation within party circles regarding how to stop the billionaire. Despite his controversial rhetoric considered by many as "racist" and "Islamophobic," the real estate mogul continues to get the support of Republican voters.

There are a lot of analyses about how to stop Trump but many concede that it does not seem possible at this moment. One scenario to stop the mogul is for the two factions of the party, establishment and core conservatives, to unite to beat Trump but that approach has never happened.

Another scenario suggests that if Trump loses Florida to Rubio and Ohio to Gov. John Kasich, both candidates' respective hometowns, it may lead to a front against Trump as he also lost Texas to Cruz. But polls don't support the likelihood of such things playing out in that fashion. National polls show Trump ahead of Rubio in Florida and Kasich in Ohio. Even if he lost both states, he may still win as long as he wins big states such as Arizona, New York, Pennsylvania and California.

Another scenario in which Rubio withdraws from the race and endorses Cruz may give a jolt to Cruz's campaign that could possibly stop Trump. But that, too, is not likely as Rubio has said he will win his home state of Florida.

The only way to stop Trump remains an unrealistic scenario where Rubio and Kasich drop out of the race after they win Florida and Ohio, then they would endorse Cruz. For Cruz to be an alternative to Trump, however, he needs to win Maine, Kansas, Kentucky and Louisiana primaries on March 5. As all these scenarios do not find support in the polls, it seems that Trump will is likely to face Clinton for president.

In January, just four weeks before the opening of the 2016 primary contest, Trump sparked a global backlash after he called for a "total and complete shutdown" of all Muslims entering the U.S. He also called for a wall to be built along the southern border to block out Mexicans, whom he called "rapists" while launching his presidency bid at Trump Tower in New York in June 2015
Last Update: Mar 04, 2016 1:14 pm
RELATED TOPICS