Lufthansa pilot school in US to face lawsuit over Germanwings crash 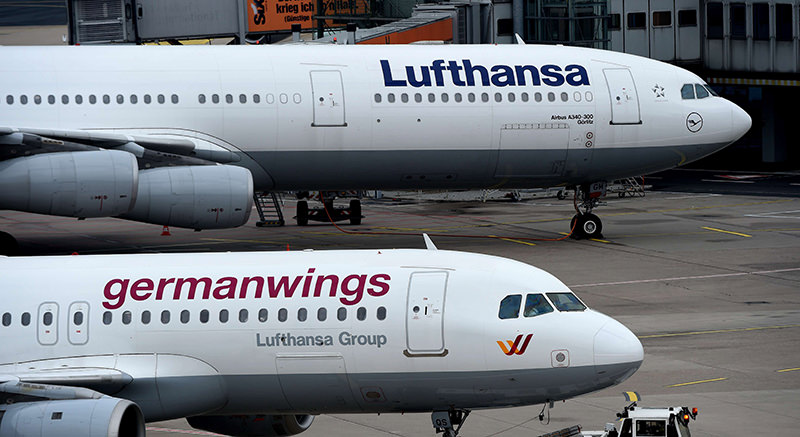 An Airbus plane of German airline Lufthansa (top) and a plane of the company's Germanwings subsidiary are pictured at the Duesseldorf airport on March 26, 2015 in Duesseldorf, western Germany (AFP Photo)
by Mar 04, 2016 12:00 am
A Lufthansa flight school in Arizona will be on the receiving end of a multi-million-dollar civil lawsuit over the crash of a Germanwings plane in the French Alps, a lawyer representing some of the 150 victims' families told dpa.

The flight's co-pilot, Andreas Lubitz, learned to fly Lufthansa jets at the training facility in Goodyear, near the state capital Phoenix, in 2008. He is thought to have crashed a passenger plane deliberately in the French Alps on March 24, 2015, killing everyone on board.

German lawyer Christof Wellens said that the US law firm tasked with considering the suit will likely submit its decision to a Phoenix court within one year of the crash date.

"Lubitz interrupted his pilot training in 2009 due to mental health problems. In our view, he should not have been able to receive his flight licence after that," Wellens said.

Reports found that the pilot had kept an existing medical condition hidden from Lufthansa, which is the parent company of low-cost carrier Germanwings.

Each of the victims could be entitled to up to 5 millions dollars in compensation in the United States, where damages are paid in much higher amounts than in Germany.

Wellens said that the sum for each claimant would need to be individually assessed and did not give an estimate on the total cost of the suit.

Attorneys have long been considering civil action over the crash, after Lufthansa's payment of 50,000 euros per victim immediately after the crash, alongside 25,000 euros in damages and 10,000 euros for the passengers' next of kin, was deemed by many as insufficient.
Last Update: Mar 04, 2016 12:27 pm
RELATED TOPICS