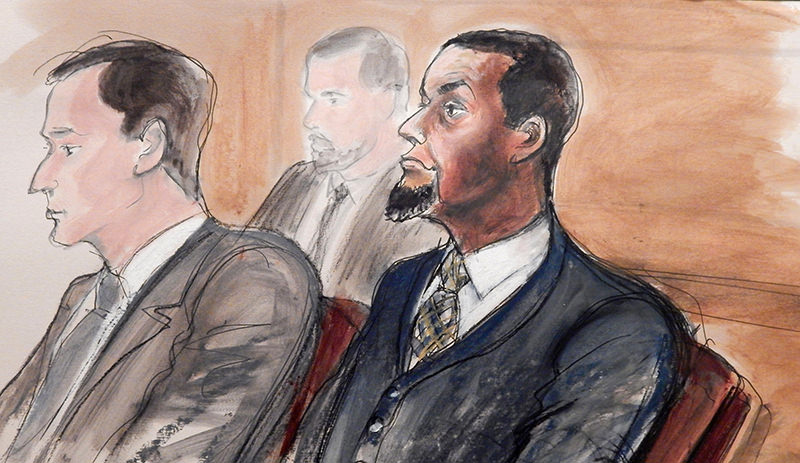 In this Feb. 24, 2016, courtroom file sketch, Tairod Nathan Webster Pugh, right, sits at the defense table with his attorney Zachary S. Taylor, during jury selection in a federal court in the Brooklyn borough of New York. (AP Photo)
by Anadolu Agency Mar 10, 2016 12:00 am
An Air Force veteran on Wednesday was found guilty of attempting to travel to Syria where he sought to join terrorist group Daesh.

A jury in a New York federal court decided that Tairod Pugh, 48, was guilty of attempting to join the extremist group less than two weeks after the trial began Feb. 29.

It's the first conviction of an American trying to aid Daesh while dozens of other Americans have been charged with attempting to join the group in Iraq and Syria, or plotting attacks in the U.S.

Prosecutors presented evidence that Pugh researched border crossings to Syria and downloaded Daesh propaganda videos, including one of prisoner executions.

He also made statements to coworkers and made social media posts that prosecutors used to establish his support for Daesh.

Pugh boarded a plane to Istanbul on Jan. 10, 2015 but was turned back by authorities when he reached Turkey. The city has been a main transit point for individuals seeking to join Daesh's caliphate.

At the time, he was found carrying four thumb drives which he stripped of their outer plastic casings "in an effort to destroy their contents and thereby make them unavailable to investigators," according to a Justice Department statement. In a draft letter to his wife, Pugh pledged to "use the talents and skills given to me by Allah to establish and defend the Islamic State".

"There is only 2 possible outcomes for me. Victory or Martyr," the letter concluded, according to the department.

The letter was not sent, and his defense attempted to use that fact to argue that while he was an ideological supporter, his efforts were mere fantasy.

Pugh served in the Air Force as an aircraft mechanic from 1986 to 1990 where he was trained to work on aircraft engines, navigation and weapons systems, according to The Associated Press.

"Pugh has now been held accountable for his crimes by a jury and will not reach the terrorist group he sought to support," the U.S. Attorney for the Eastern District of New York said in a statement.

He now faces a maximum sentence of 35 years in prison and will be sentenced in September.
Last Update: Mar 10, 2016 9:05 am
RELATED TOPICS