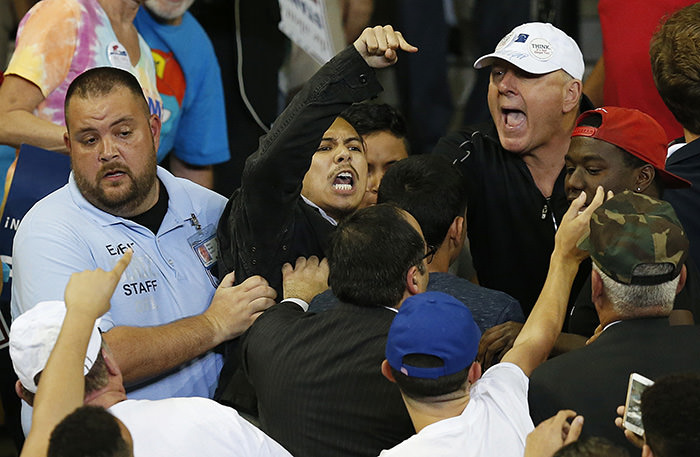 In this Saturday, March 5, 2016 file photo, a man is removed as he protests Republican presidential candidate Donald Trump during a campaign rally in Orlando, Fla. (AP Photo)
by Associated Press Mar 11, 2016 12:00 am

As Republican presidential front-runner Donald Trump attempts to unify a fractured party around his candidacy, images of his supporters attacking protesters and allegations that he's inciting violence are raising new questions about the divisive nature of his campaign.

Trump had to answer questions at Thursday night's debate about video that showed a white supporter punching a black protester at a rally this week in North Carolina. The supporter was charged with assault Thursday.

"It's not the America they portray on TV," 26-year-old Rakeem Jones said a day after being punched.

It was the latest in a series of scuffles at his often heated rallies, where protesters frequently clash with supporters and security. Last year, video captured Trump supporters physically assaulting Mercutio Southall Jr., an African-American activist, at a rally in Alabama.

At past events, Trump has said he'd like to punch a protester in the face and promised to pay supporters' legal fees if they get into trouble. He's spoken fondly of the "good old days" when police could rough protesters up without fear of backlash.

Trump on Thursday rejected the idea that he was responsible for the incidents and said some of the protesters at his rallies "are bad dudes and have done bad things."

And he defended his supporters: "People come with tremendous passion and love for the country," he said. "When they see what's going on in this country, they have anger that's unbelievable."

Security experts say Trump is playing with fire by not calming uncivil behavior and assault. "I would go so far as to say that I find that abhorrent," security consultant Stan Kephart, a former police chief in Arizona and California. "To me, he's pressing the line. He's doing things that you would see a showman do."

The role of law enforcement in these situations is not simple.

"We respect folks' First Amendment rights to free speech. We're not there to police the protesters," said Robert K. Hoback, a spokesman for the Secret Service, commenting on reports that Secret Service agents escorted protesters out of a recent Trump event in Georgia. He said they only act on threats to the "protectee."

Trump will hold rallies on Friday in two states that vote Tuesday. One is at the University of Illinois at Chicago, a civil and immigrant rights organizing hub with large minority student populations.

Dozens of faculty and staff petitioned university administrators to cancel the rally, citing concerns it would create a "hostile and physically dangerous environment" for students. Chicago police plan a heavy presence.

Rep. Luis Gutierrez, student activists and longtime Chicago organizers are all planning to protest outside the venue over what they called Trump's disparaging comments, particularly about Muslims and Mexicans.

"We're not going to let Donald Trump take us back to the 1950s," said Gutierrez, a Chicago Democrat. "We've worked too hard."