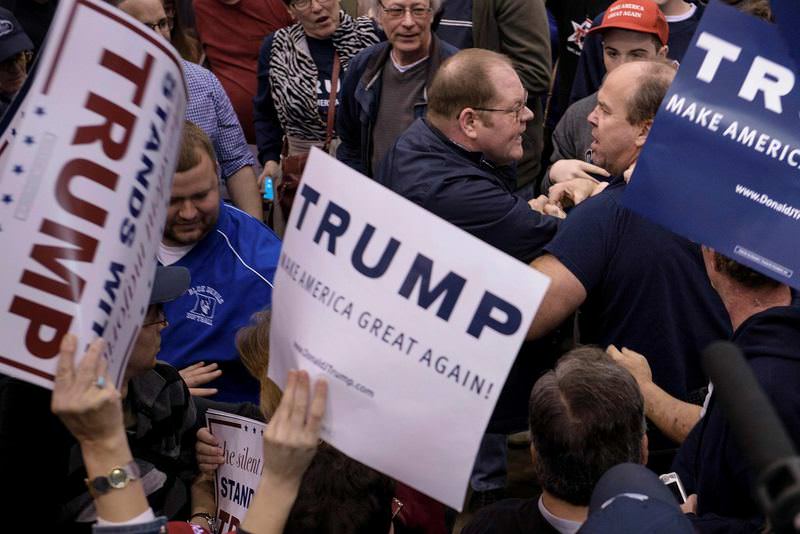 Supporters and opponents of Donald Trump clashed with each other in Chicago which led to the cancelation his rallies.
by Daily Sabah with AP Mar 14, 2016 12:00 am

Donald Trump, who continues to use harsh anti-migrant and anti-Muslim rhetoric, has changed the balances in the Republican race as his supporters and opponents violently clash forcing the billionaire to postpone his rallies

In a Republican presidential primary filled with extraordinary moments, a 24-hour stretch that began Friday night stands above them all. Opponents of Donald Trump were so committed to keeping him from speaking in Chicago that they aggressively clashed with supporters, forcing the GOP front-runner to abruptly cancel his rally before it even began. The next morning, two of the candidates still fighting to defeat Trump, Florida Sen. Marco Rubio and Ohio Gov. John Kasich, said they were so disgusted by the chaos that they may not support the billionaire businessman if he clinches their party's nomination. And when Trump appeared at another rally Saturday morning in Ohio, he was suddenly pulled mid-speech into a protective ring of U.S. Secret Service agents charged with guarding his life after a man rushed the stage. "Thank you for the warning," Trump told the crowd after he resumed his speech.

Each moment has virtually no precedent in modern presidential politics. Taken together, they exposed anew the remarkable anxiety ripping through a country dealing with profound economic and demographic changes, as well as the anger roiling inside one of America's great political parties. For those cringing at the discord and Trump's unanticipated political rise, there were no easy answers Saturday. While not mentioning Trump by name, Republican National Committee Chairman Reince Priebus said in a statement Saturday that political leaders in both parties have a responsibility to ensure that the "discourse we engage in promotes the best of America." "While we have differences, the exercise of our right to free speech should be just that: speech," Priebus said. "Violence is never the answer. Violence only begets violence."

Republican traditionalists kept whispering in private conversations about long-shot options for stopping Trump, either at a contested convention or by rallying around a potential third-party option. Trump, meanwhile, could put the Republican nomination out of reach to others in Tuesday's slate of five delegate-rich primaries. Trump's rivals have spent months tiptoeing around his provocative comments for fear of alienating his impassioned supporters. Even in Thursday night's debate, all three of his remaining rivals Rubio, Kasich and Texas Sen. Ted Cruz sidestepped a question about whether outbursts of violence at Trump's rallies and his statements encouraging supporters to aggressively take on protesters concerned them. But the images spilling out of Chicago, with young people angrily confronting each other, often divided by racial lines, appeared to be too much. In an interview with The Associated Press, Rubio said he may not be able to support Trump if he's the GOP nominee, citing the way he's "dividing both the party and the country so bitterly."

The Florida senator, who won the party's caucuses in Washington D.C. on Saturday, wouldn't say whether he'd look for a third-party candidate to support if Trump does become the Republican standard-bearer. He added, "The fact that you even have to ask me the question shows why (Trump) is a problem." Kasich, who has largely avoided tangling with Trump until now, said the real estate mogul has created a "toxic environment" that makes it "extremely difficult" to envision supporting him as the Republican nominee. "To see Americans slugging themselves at a political rally deeply disturbed me," Kasich said while campaigning in Cincinnati. "We're better than that." Only Texas Sen. Ted Cruz, who is closest to Trump in the delegate count, said he would unequivocally support the businessman if he emerges from the primary victorious. Still, Cruz eager for Rubio and Kasich to get out of the race after their home-state primaries on Tuesday so he can take Trump on in a head-to-head contest blamed his rival for encouraging the kind of "nasty violence" that occurred in Chicago.

President Barack Obama, speaking at a Democratic fundraiser in Dallas, said those who aspire to lead the country "should be trying to bring us together and not turning us against one another," and he urged leaders to "speak out against violence." "If they refuse to do that, they don't deserve our support," he said. With his delegate lead mounting, there's little evidence that Trump sees any reason to alter an approach that includes encouraging his supporters to aggressively and sometimes physically stop protesters from interrupting his raucous rallies. Instead, Trump said at a rally Saturday afternoon in Cleveland, which was also interrupted several times by dozens of protesters, that he thought all the disruptions would help him. "It just makes all of our friends and supporters more angry. We're going to go to the polls on Tuesday," he said, predicting a "resounding victory." Nor did Trump moderate elsewhere. On Twitter, Trump said the man who rushed the stage at his Ohio event had ties to the Islamic State, citing a video that experts said could not possibly be linked to the radical militant group. He also alleged online that Rubio and his Republican allies in Florida were trying to "rig the vote" in the Florida senator's favor and that he'd asked law enforcement to investigate. Florida elections officials said they had not heard of any such problems and had received no formal complaints. Indeed, Trump appeared eager to paint himself as the victim of the extraordinary events. He complained the well-organized protesters in Chicago intent on keeping him from speaking had violated his First Amendment rights, and questioned why no one was asking Bernie Sanders to defend the actions of his backers.

In January, just four weeks before the opening of the 2016 primary contest, Trump sparked a global backlash after he called for a "total and complete shutdown" of all Muslims entering the U.S. He also called for a wall to be built along the southern border to block out Mexicans, whom he called "rapists" while launching his presidency bid at Trump Tower in New York in June 2015. Trump's proposal to ban Muslims has been condemned by Republicans and Democrats alike as un-American and counterproductive, yet his hardline approach on immigration has fueled his popularity among the overwhelmingly white Republican primary electorate. Many prominent figures, including boxing legend Muhammad Ali, Facebook CEO Mark Zuckerberg and U.S. basketball legend Kareem Abdul-Jabbar, and political figures like Obama lashed out at Trump's Islamophobic remarks, calling them un-American. The Republican leaders from the speaker of the House of Representatives, Paul Ryan, to former Vice President Dick Cheney have distanced themselves from the billionaire businessman.