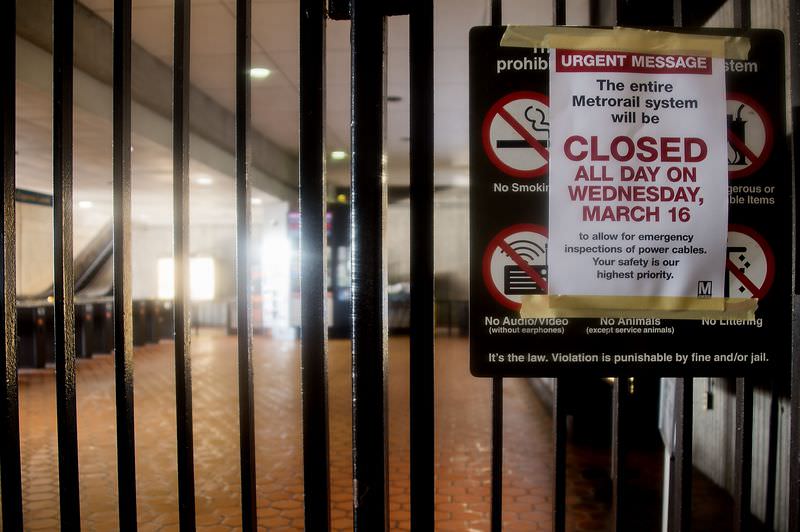 Commuters in the US capital strapped on walking shoes and dusted off their bicycles Wednesday, as the regional subway -- second busiest in America -- shut down for a day of safety checks.

With Washington's Metro rail system shuttered all day for emergency inspections, thousands resorted to travel on foot, by bike and on the city's already congested roads, creating bumper-to-bumper gridlock.

On the region's highways, backups stretched from the remote suburbs into the heart of downtown Washington.

Traffic clogged the city's streets for hours, long after the usual end of the morning rush, and the commute home was equally miserable for many.

Officials confirmed that trains would resume running as planned but warned of potential further "impacts" to service in some areas as the checks continued and possibly unearthed more problems.

Twenty-six problem areas had been identified after completion of 80 percent of the inspections, with some still in need of fixing, officials said in the early evening, promising this would happen overnight.

"I know that today presented a hardship for many throughout the region, but I want to emphasize that this shutdown was indeed necessary," Metro's general manager and chief executive Paul Wiedefeld said in a statement.

"I want to thank everyone for their patience and support in putting safety first."

The closure sparked fierce competition for taxis and Ubers, as well as seats on the region's buses.

It also unleashed a torrent of criticism against the beleaguered transit system, known as Metrorail, which has been plagued by safety concerns and chronic delays.

Another expressed incredulity that Metro gave just one day's warning for the closures.

"On less than 12 hours notice??? Are you absolutely insane? How can you possibly expect a million people to see this and make plans?" a Twitter user wrote in a post addressed to WMATA, the regional authority that runs Metro.

Meanwhile, there was schadenfreude in towns and cities elsewhere in the country.

"Citizens of New York! The MTA is looking pretty good to you right now, isn't it?" the Metropolitan Transit Authority in the Big Apple tweeted.

The Washington rail system, used by an estimated 700,000 riders each day, is a vital "people-mover," and is especially important to the legions who live in the suburbs of neighboring Virginia and Maryland.

Metro tried to lessen the pain by adding buses to some routes and offering free parking in its lots and garages for those carpooling and as a rendezvous point for those taking taxis or buses.

The unprecedented system-wide inspections were scheduled after an electrical fire in a subway tunnel led to system-wide backups and raised concerns about a possible widespread infrastructure problem.

Ripple effects from the shutdown were felt throughout the Washington area.

Federal offices remained open but employees were given the option of taking unscheduled leave or working from home.

The popular Smithsonian museum system, among Washington's premier tourist attractions, pushed back its opening times a couple of hours to give employees time to make their way to work.

US lawmakers in the nation's capital -- especially those from neighboring Maryland and Virginia -- also expressed displeasure.

"#MetroShutdown during a weekday w/ minimal notice is unacceptable & untenable," tweeted Ben Cardin, a US senator from Maryland.

It is just the latest round of bad publicity for the Washington Metro, which has 91 stations and began operating in 1976.

In January of last year, a woman died and dozens of people were injured after thick smoke filled a metro tunnel during evening rush hour due to an electrical malfunction.

The whole system -- along with all buses -- also closed for an entire weekend during the "Snowzilla" blizzard that bombarded much of the US East Coast in January.

Then on Monday this week, a cable fire erupted in a tunnel, sparking major delays on three lines -- and ultimately the decision to shut the system down.