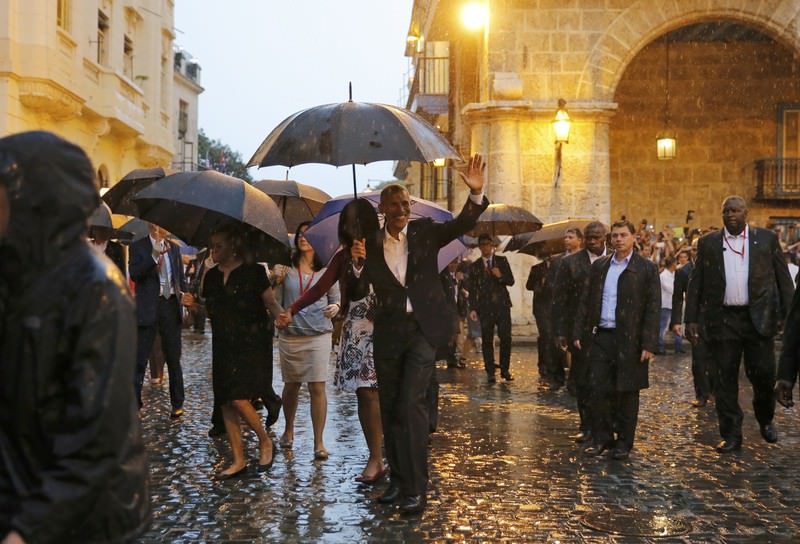 U.S. President Obama arrived in the Cuban capital of Havana to start a historic visit culminating a process of rapprochement that began more than a year ago. Obama is the first U.S. president to set foot on the island in nearly seven decades

U.S. President Barack Obama opened an extraordinary visit to Cuba on Sunday, eager to push decades of acrimony deeper into the past and forge irreversible ties with America's former adversary. "It is wonderful to be here," he said.

As Air Force One touched down in Havana, the U.S. president cheerfully began the landmark trip by tweeting in local slang: "Que bola Cuba?" or, "What's up?" Obama, his wife Michelle and their two daughters Sasha and Malia clutched umbrellas to shield themselves from drizzle as they descended the stairs to the tarmac.

"This is a historic visit," declared Obama, who was to meet Monday with Cuban President Raul Castro, the lesser known brother of Fidel, who handed over the leadership in 2008.

For Cubans dreaming of escaping isolation and reinvigorating their threadbare economy, the visit has created huge excitement. Police were out in large numbers when Obama left for his first event, a visit to the beautifully restored old town of Havana. The heavy rain and stifling presence of security agents left the streets eerily empty.

Plainclothes agents blocked off streets, buildings in the area were put under temporary lockdown and ordinary Cubans were hard to find anywhere close to Obama's route, easily outnumbered by security agents and foreign tourists. "Maybe they let me come here because they think I'm a tourist with my backpack," said civil engineer Ariel Hernandez, 42. Despite the strained atmosphere, Hernandez echoed many Cubans when he said he had great expectations for the visit. "It's about hope in the future, that's the big change," he said.

Obama is looking to leave a historic foreign policy mark in his final year in office. After meeting embassy staff, he toured old town Havana, greeting the archbishop of Havana, Jaime Ortega, who helped facilitate secret talks on the U.S.-Cuban rapprochement.

For more than 50 years, Cuba was an unimaginable destination for a U.S. president, as well as many American citizens. The U.S. severed diplomatic relations with Cuba in 1961 after Fidel Castro's revolution sparked fears of communism spreading to the western hemisphere. Domestic politics in both countries contributed to the continued estrangement well after the Cold War ended.

"He wanted to come to Cuba with all his heart," 79-year-old Odilia Collazo said in Spanish as she watched Obama's arrival live on state television. "Let God will that this is good for all Cubans. It seems to me that Obama wants to do something good before he leaves."

Obama's visit was highly anticipated in Cuba where workers furiously cleaned up the streets in Old Havana and gave buildings a fresh coat of paint ahead of his arrival. American flags were raised alongside the Cuban colors in parts of the capital, an improbable image for those who have lived through a half-century of bitterness between the two countries.

A highlight of Obama's visit comes on Tuesday when he joins Castro and a crowd of baseball-crazed Cubans for a game between the beloved national team and Major League Baseball's Tampa Bay Rays. Obama will also give a speech at the Grand Theater of Havana laying out his vision for greater freedoms and more economic opportunity in Cuba.

Two years after taking power in 2008, Raul Castro launched economic and social reforms that appear slow-moving to many Cubans and foreigners, but are lasting and widespread within Cuban society. The changes have allowed hundreds of thousands of people to work in the private sector and have relaxed limits on cellphones, the Internet and Cubans' comfort with discussing their country's problems in public.

The Cuban government has been unyielding, however, on making changes to its single-party political system and to the strict limits on media, public speech, assembly and dissent.

A major focus for Obama was pushing his Cuba policy to the point it will be all but impossible for the next president to reverse it. That includes highlighting new business deals by American companies, including hotel chains Starwood and Marriott and online lodging service Airbnb. Lawmakers including Democratic House Minority Leader Nancy Pelosi are with Obama while a delegation of political and business leaders are traveling separately. "It's a soft war using visitors as the soldiers, commercial airlines as the air force and cruise ships as the navy," said John Kavulich, president of the U.S.-Cuba Trade and Economic Council.

Cuba's regime, which for decades defined itself as the people's bulwark against the "Yankee" enemy, has bowed to the fact that Cubans would rather do business than make war.

And as if Obama's arrival were not enough to illustrate the sea change in Cuba, the Rolling Stones – a symbol of the cultural imperialism that communist leaders used to rage against – are playing a free concert in Havana on Friday.