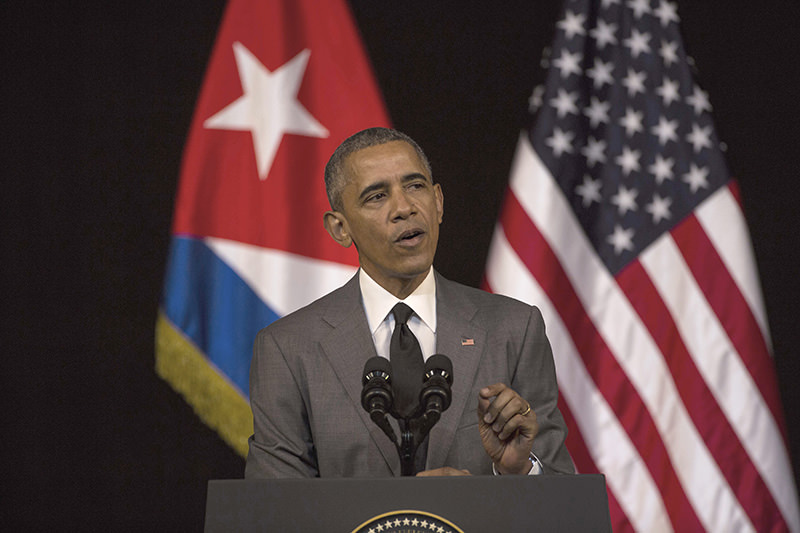 President Barack Obama urged Cubans on Tuesday to look toward a hopeful future with the United States, casting his historic visit to the communist nation as a moment to "bury the last remnant of the Cold War in the Americas."

In a speech peppered with Spanish at the Grand Theater of Havana, Obama said he wanted Cubans to see possibilities to move past any "blind optimism" that the country's problems will disappear and instead plant roots for a future they shape for themselves. Reflecting on a half-century of U.S. efforts to isolate Cuba, Obama said he was pursuing a new approach because "what the United States was doing was not working."

To Cuban President Raul Castro, watching from a balcony, he added, "I believe my visit here demonstrates you do not need to fear a threat from the United States."

Obama's address was carried live on Cuba's tightly controlled state television, offering him a rare, unfettered opportunity to speak directly to the country's citizens about his vision. On the streets of Havana many Cubans who caught the president's speech were jubilant.

"We agree with everything he said in the speech," said Barbara Ugarte, 45, who owns a gift shop. Omardy Isaac, a 43-year-old who works in the same shop, added that "Cubans need all of their rights and I am in favor of democracy."

Obama's address opened a whirlwind final day on the island that included a meeting with Cuban dissidents and a baseball game featuring the country's beloved national team events made possible by the normalization of U.S. and Cuban relations 15 months ago. It had been nearly 90 years since a sitting U.S. president visited the island.

Despite the enthusiasm in both the U.S. and Cuba about a new relationship between former foes, Obama acknowledged deep differences persist, including on human rights and democracy. With prominent members of Cuban society looking on, he called for citizens to be able to "speak their minds without fear" and pick their leaders in free and fair elections.

The president was cheered when he reiterated his call for the U.S. Congress to lift the economic embargo on Cuba, calling it an "outdated burden on the Cuban people."

The embargo is loathed on the island. During a joint appearance with Obama on Monday, Castro called it "the most important obstacle" to Cuba's economic growth."

Obama's last day in Cuba was shadowed by the horrific attacks in Brussels, where scores of people were killed in explosions at the airport and a metro station. The president opened his remarks by vowing to do "whatever is necessary" to support Belgium.

Throughout his presidency, Obama has sought to refocus U.S. foreign policy on areas like Latin America that have received less attention than the turmoil in the Middle East and the terrorism emanating from the region. The White House hopes that restoring ties with Cuba will benefit U.S. relations with other countries in Latin America, which have long bristled at Washington's freeze with Havana.

Critics of Obama's policy say he's given up too much with too little in return from Cuba, particularly on human rights. White House officials pointed to the president's meeting with about a dozen dissidents Tuesday as a sign of his focus on Cuban repression, saying that allowing the gathering was a prerequisite for his entire visit.

In brief comments ahead of the private meeting, Obama said his purpose was to ensure that the voices and concerns of the Cuban people can help "shape U.S. policy" toward the island.

"There are people here who have been detained some in the past, some very recently," Obama said. "It requires oftentimes great courage to be active in civic life here in Cuba."

Among the dissidents meeting with Obama were activists, an attorney, a journalist and Berta Soler of the Ladies in White, a group that organizes weekly demonstrations that regularly lead to short detentions. Though Cuba has been criticized for that practice, the long prison sentences handed down in the past have diminished dramatically in recent years.

The issue of political prisoners is hugely important to Cuban-Americans and to the international community. Yet most people on the island are more concerned about the shortage of goods and their own struggles with local bureaucracy.

As Obama pushed for democracy, he pointed to America's own turbulent history. He held up the current presidential election as an example of how change can come.

"You have two Cuban-Americans in the Republican Party running against the legacy of a black man who is president while arguing that they're the best person to beat the Democratic nominee, who will either be a woman or a democratic socialist," Obama said.

Republicans Ted Cruz and Marco Rubio, both of Cuban descent, have sought the GOP nomination, though Rubio recently ended his campaign. The Democratic contest is between Hillary Clinton and Bernie Sanders, a self-described democratic socialist.