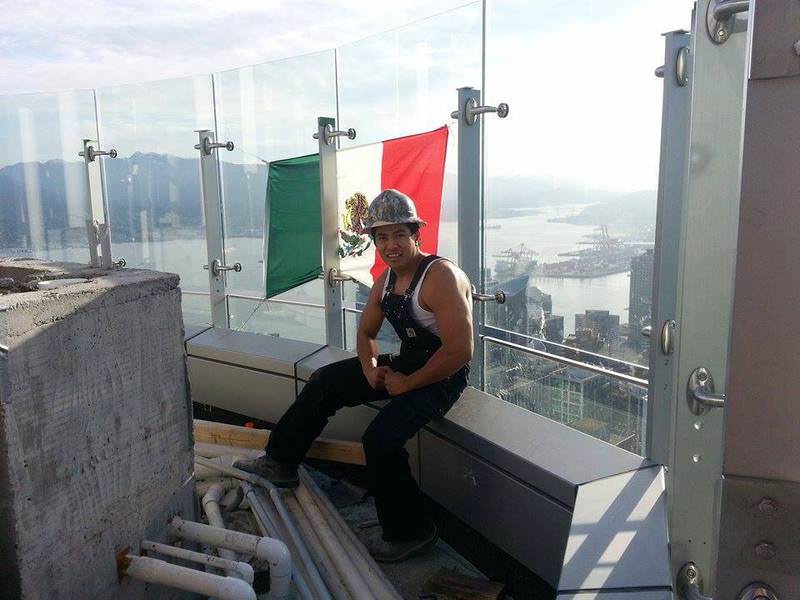 A Mexican-born construction worker said he hung his native country's flag high above Vancouver to remind Donald Trump that his compatriots built a 63-storey tower that carries the billionaire's name.

Diego Reyna has drawn the attention of international media after hanging a Mexican flag atop the Trump International Hotel and Tower over the weekend and recording a 43-second video that said the building wouldn't exist without immigrants.

In the video he said Mexicans performed everything from drywall to concrete finishing on the project. During his campaign for the Republican presidential nomination, Trump has been criticized after suggesting some Mexicans entering the U.S. are murderers and rapists.

"This building is standing here today thanks to us, to our work," he says. "There's a little present for Mr. Trump, so every time you judge us you can think who is building your towers."

Reyna said in a separate Facebook post that Mexicans didn't steal or rape but just did the best work they possibly could.

"Your tower here in Vancouver is premium quality, and we were a crucial part of it, not just Mexicans but immigrants as a whole, like your ancestors were," he said.

"The insults you have said about us have not changed our work ethics."

The Holborn Group of Companies, the Vancouver developer behind the project, did not immediately respond to a message seeking comment on Tuesday.

This isn't the first time the building has been at the center of a Trump backlash.

In December, Vancouver Mayor Gregor Robertson sent a letter urging the developer to drop Trump's name from the tower, citing a petition signed by more than 50,000 people asking that the U.S. businessman's name be removed from the tower following the Republican hopeful's call to ban Muslims from entering the United States.

Trump visited the city in 2013 to help announce the project. The Trump Organization said it was lending its brand power and operating the tower, but that the family would not be investing in the development.