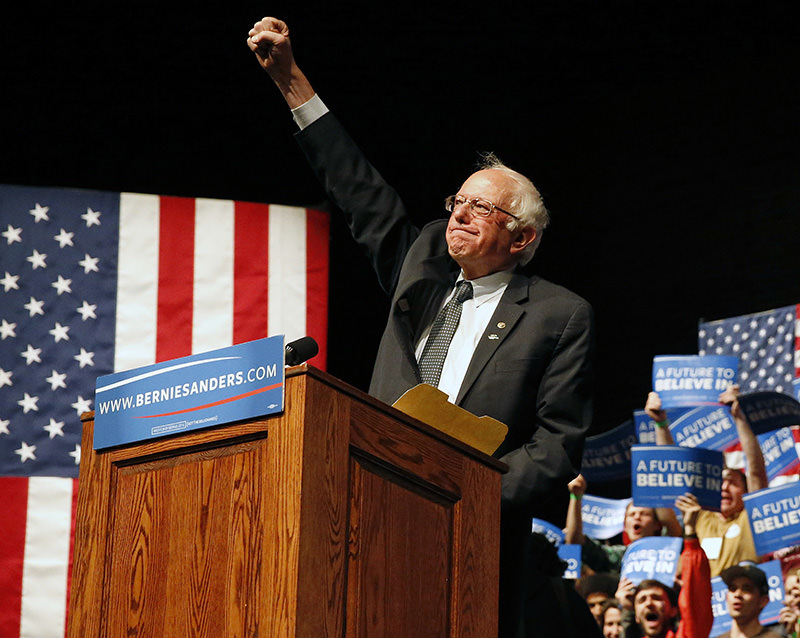 Trump's defeat capped one of the worst periods of his campaign, a brutal stretch that highlighted his weaknesses with women and raised questions about his policy depth. While the billionaire businessman still leads the Republican field, Cruz and an array of anti-Trump forces hope Wisconsin signals the start of his decline.

"Tonight is a turning point," Cruz told cheering supporters at a victory rally. "It is a call from the hardworking people of Wisconsin to America. We have a choice. A real choice."

Cruz, an ultraconservative Texas senator with a complicated relationship with Republican leaders, also cast his victory as a moment for unity in a party that has been roiled by a contentious primary campaign.

But Trump was unbowed. His campaign put out a biting statement: "Ted Cruz is worse than a puppet--- he is a Trojan horse, being used by the party bosses attempting to steal the nomination from Mr. Trump."

Sanders's sweeping win in virtually every county in Wisconsin, except Milwaukee, gives him greater incentive to keep competing against Clinton. But he still trails her in the pledged delegate count and has so far been unable to persuade superdelegates the party officials who can back any candidate to drop their allegiance to the former secretary of state and back his campaign.

At a raucous rally in Wyoming, Sanders cast his victory as a sign of mounting momentum for his campaign.

"With our victory tonight is Wisconsin, we have now won 7 out of 8 of the last caucuses and primaries," he declared. Sanders is favored to win the Wyoming Democratic caucuses on Saturday.

The results in Wisconsin make it likely both parties' primaries will continue deep into the spring, draping front-runners Trump and Clinton in uncertainty and preventing both from fully setting their sights on the general election.

With an overwhelming white electorate and liberal pockets of voters, Wisconsin was favorable territory for Sanders. In a sign of Clinton's low expectations in the Midwestern state, she spent Tuesday night at a fundraiser with top donors in New York City. The focus of the campaign now turns to New York which holds its critical primary on April 19.

Clinton congratulated Sanders on Twitter and thanked her supporters in Wisconsin. "To all the voters and volunteers who poured your hearts into this campaign: Forward!" she wrote.

Because Democrats award delegates proportionally, Sanders' victory in Wisconsin will not cut significantly into Clinton's lead in the pledged delegate count. With 86 delegates at stake in Wisconsin, Sanders will pick up at least 45 and Clinton will gain at least 31. The state-by-state nominating contests are choosing delegates to the parties' national conventions that will select the presidential nominees.

Sanders must still win 67 percent of the remaining delegates and uncommitted superdelegates in order to win the Democratic presidential nomination.

With most of Wisconsin's delegates allotted, Clinton now has 1,274 delegates to Sanders' 1,025, based on primary and caucus results alone. When including superdelegates, Clinton has a wider lead 1,743 to 1,056. It takes 2,383 delegates to win the nomination.

Clinton's campaign has cast her overall lead as nearly insurmountable. But Sanders, a self-declared democratic socialist, has taken his dark-horse candidacy from a mere annoyance to Clinton to a serious challenge for the former secretary of state, who had largely been expected to take the Democrat nomination in a walk when the contest began last year.

While Trump has been the dominant force in the Republican race, he battled a series of campaign controversies in the lead-up to Wisconsin, including his campaign manager's legal problems following an altercation with a female reporter and his own awkward stumbles in clarifying his views on abortion. Wisconsin's Republican establishment, including Gov. Scott Walker, also campaigned aggressively against the businessman.

Exit polls in the state underscored the concerns about Trump that are surging through some corners of the Republican Party. A majority of Republican voters said they're either concerned or scared of a potential Trump presidency. More than a third said they were scared about what Trump would do as president, and about 2 in 10 said they were concerned, according to surveys conducted by Edison Research for The Associated Press and television networks.

With his victory Tuesday, Cruz won at least 33 Wisconsin delegates, while Trump carried at least three. Six delegates are still up for grabs, pending the outcome in two congressional districts.

With Wisconsin results included, Trump led with 740 delegates to Cruz's 508, while Kasich had 143. It takes 1,237 delegates to win the nomination.

Trump still has a narrow path to claim the nomination by the end of the primaries on June 7. But by losing Wisconsin, the real estate mogul has little room for error in upcoming contests.

Trump would need to win 57 percent of those remaining to clinch the Republican nomination before the July convention. So far, Trump has won 48 percent of the delegates awarded.

Complicating the primary landscape for both Cruz and Trump is the continuing candidacy of John Kasich. The Ohio governor's only victory has come in his home state, but he's still picking up delegates that could otherwise help Trump inch closer to the nomination or help Cruz catch up.