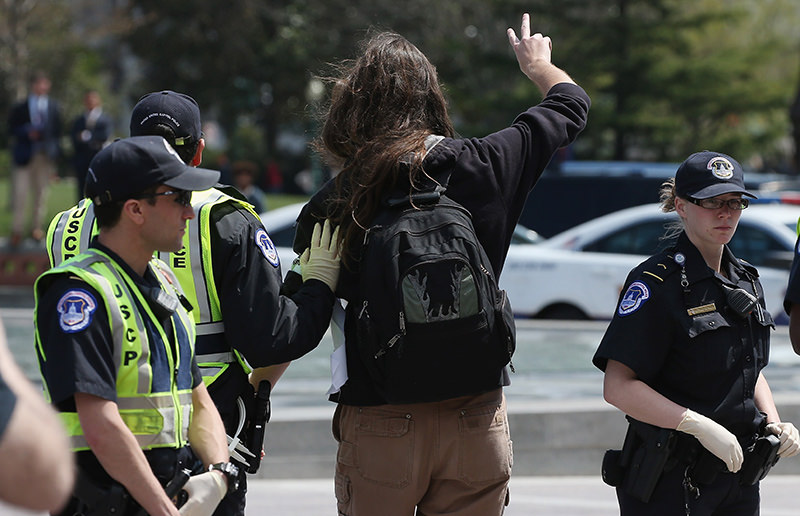 Police arrested more than 400 protesters outside the U.S. Capitol on Monday during a protest organized by Democracy Spring, an organization seeking to remove money from politics and combat restrictive voter identification laws.

The demonstration was mostly calm and orderly, yet resulted in arrests for what U.S. Capitol Police called "unlawful demonstration activity," claiming crowding and obstruction. Organizers vowed to repeat the demonstration outside the Capitol every day this week.

The protest was called "to demand Congress take immediate action to end the corruption of big money in our politics and ensure free and fair elections," according to a statement by Democracy Spring on its website.

The group lists among its supporters the actor Mark Ruffalo, the academic Noam Chomsky, and dozens of well-known activist groups. "We believe this is the people's house, and Congress should be responsive to the people. We need to protect voting rights," said Peter Callahan, the group's communications coordinator.

The demonstrators chanted slogans such as "one person, one vote" and "money out of politics" while they sat on the East Front of the Capitol. One sign read "Things go better without Koch," a reference to the conservative billionaire businessmen David and Charles Koch, who have promised to lead an almost $900-million campaign to back favored candidates in this election cycle.

Protesters hoisted a scarecrow-like effigy of a corporate lobbyist holding money bags and a sign reading, "Warning: Massive civil disobedience is next." Police led dozens of protesters away in plastic handcuffs into a bus and shuttle vans, prompting cheers from an opposing group of protesters, who were separated by a large number of police.

Democracy Spring traces its roots to the end of the Occupy Los Angeles movement, and their rise coincides with the presidential campaigns of Democrat Bernie Sanders and Republican Donald Trump, both of whom speak against the influence of campaign contributions on politicians.

Many of the protesters marched from Philadelphia to Washington over the past week.

While most of the groups involved are associated more with Democrats than Republicans, Callahan said the group was nonpartisan. "We see populism on the rise on both sides of the spectrum. Americans are sick and tired of their politicians being bought and paid for," Callahan said.
Last Update: Apr 12, 2016 2:54 pm
RELATED TOPICS