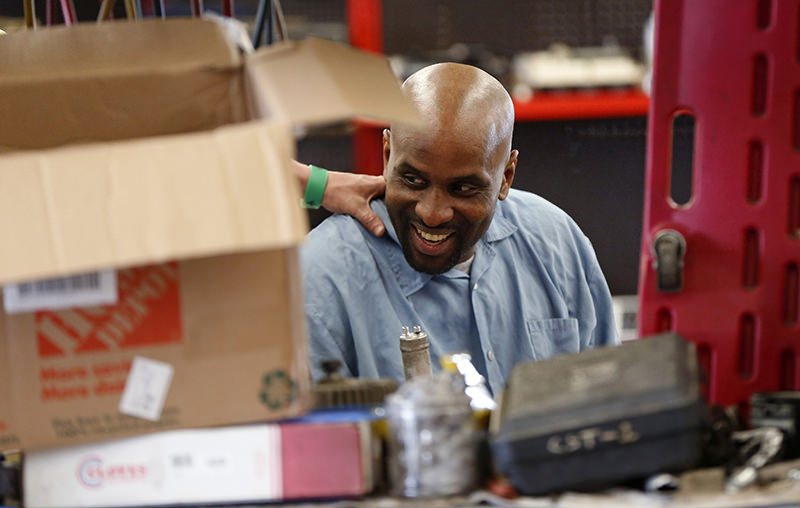 A maximum-security prison in Louisiana once notorious for its violence is experimenting with a novel way to keep criminals out of trouble: Murderers and other "lifers" are now mentors, teaching job skills and morals to nonviolent offenders, preparing them for another shot at freedom.

Since 2010, the pilot program at Louisiana State Penitentiary at Angola has authorized several state judges to sentence dozens of low-level offenders to at least two years at the prison — typically sparing them much longer terms behind bars.

Roughly 130 of these "short-timers" are learning such trades as automotive repair, welding, horticulture and plumbing from inmates serving life sentences. Each is assigned a social mentor responsible for their moral rehabilitation, amid hopes they won't return to a life of crime once freed.

Louisiana has the highest incarceration rate in the nation, yet some experts say its six-year-old re-entry court program could be a model for other states trying to reduce recidivism rates — a measure of how many prisoners relapse into criminal activity after they're released.

Nearly 100 inmates already have graduated and left Angola. Most needed a job lined up outside prison walls to qualify for release.

Thomas Bush, 30, said he was wary when he was sentenced to the program for drug and firearm offenses.

Save for the razor wire surrounding this prison beside the Mississippi River, the auto repair shop looks like any other. Instructors and students in grease-stained overalls work on prison employees' cars using donated equipment.

"I've been locked up other places," Bush said. "This place is completely, 180 degrees opposite from what I expected. It's almost like a college campus."

The shop is run by John Sheehan, a convicted murderer at Angola since 1988. Sheehan said one recent graduate is earning $20 per hour at a New Orleans area car dealership.

"It makes me feel good to know that I've helped him," he said. "I may be in prison, but I don't want to think like a prisoner or act like a prisoner."

The judges already see evidence the program is breaking a cycle of crime. And they give mentors much credit.

Justin Singleton, 13 years into a life sentence for a murder conviction, said he feels like a father figure or big brother.

"And even though I'm not able to be there, these guys are able to go out there and do something positive with their lives," said Singleton, 36. "That's more rewarding than anything that I've accomplished in my own life."

Assistant warden Perry Stagg said prison officials from Mississippi, Texas and other states have visited Angola to see the program. In January, Attorney General Loretta Lynch attended a round-table discussion on it in New Orleans.

"She was very interested in how we do things," Stagg said.

Angola's short-timers share dormitories with their mentors but aren't isolated from some 6,300 other inmates.

"I want them to be exposed to the pressures and the temptations of prison," Stagg said. "They need to be able to learn how to fight those temptations off."

Short-timers get drug treatment and have to have a GED diploma. Stagg said lessons about morals and values are crucial to the program.

"Their main job is to teach them to refocus their life, to change their heart and mind," he said.

Most states employ re-entry programs, drug courts and other specialty courts to reduce recidivism rates. What makes the Angola program unique, experts said, is the mentoring by lifers and the courts' role in selecting and monitoring participants from the beginning to the end of their sentences.

"I haven't seen it operate in the U.S. in this way at all," said David Khey, a criminal justice professor at the University of Louisiana at Lafayette.

Only nine court jurisdictions, including in New Orleans and Baton Rouge, are currently authorized to participate in Angola's program and a smaller companion program at a women's prison. But the state Supreme Court appointed a participating judge to examine how the program could be expanded elsewhere, with Khey's input.

So far, only one of 27 program graduates from one court jurisdiction alone has returned to prison since the first was released in 2013 — what Khey calls a "very promising" rate.

"This is not a free pass for anybody," said Judge Scott Schlegel in greater New Orleans' Jefferson Parish. "If you want to change, we are here to help you succeed."

Montrel Stiebling entered Angola without a high-school degree or a trade after pleading guilty to an attempted firearm possession charge that could have meant a decade behind bars. The 25-year-old earned his GED diploma and passed two Automotive Service Excellence certification tests in prison.

Six months ago, he landed a job at a New Orleans car dealership's body shop.

"I don't think anybody should spend a day up there, but I don't regret it because it helped me out a lot," said Stiebling, who was freed in 2012 but remains on probation.